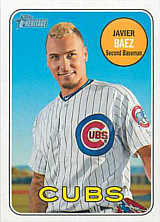 Javier Baez was a top 10 draft pick in 2011. He was a key component in the Chicago Cubs first world championship since 2016 and is a two-time All-Star.

Baez moved to Florida from Puerto Rico in 2005. He hit .711 with 22 homers in 115 at-bats as a high school senior. The Cubs took him with the 9th pick of the 2011 amateur draft, one slot after another Puerto Rico-born, Florida-raised shortstop in Francisco Lindor. The scout was Tom Clark. He made his pro debut that summer with the AZL Cubs before moving up to the Boise Hawks. Overall, he was 5 for 20 with two doubles and two steals. He fielded terribly, with 6 errors and a .778 fielding percentage.

On June 10, 2013, he became the second player in Florida State League history to hit four home runs in one game, when he did so for the Daytona Cubs in a 9-6 win over the Fort Myers Miracle. Ryan Harvey had been the only other player to accomplish the feat in the FSL, back in 2006. He was promoted to the Tennessee Smokies of the Double A Southern League later that season, and finished with a combined batting line of .282/.341/.578 in 130 games between the two stops, with 34 doubles, 37 homers, 98 runs scored and 111 RBI. He was ranked the 5th best prospect in all of baseball by Baseball America after the season.

In 2014, the Cubs assigned Javier to Triple A Iowa of the Pacific Coast League, after he continued to turn heads in spring training. He was named to the World team for the 2014 Futures Game played at Target Field on July 13th and showed his tremendous power, hitting a two-run homer off Lucas Giolito that temporarily put his side ahead, 2-1, in the 6th inning. He had begun to play second base in addition to shortstop that season, in anticipation of a promotion to Chicago where All-Star Starlin Castro was seemingly entrenched at shortstop. He hit .260 with 23 homers and 80 RBI in 104 games for the Iowa Cubs. On August 5th, the Cubs decided he was ready and called him up to make his major league debut that day in a game against the Colorado Rockies, playing second base and hitting second. He was hitless in his first five at-bats, striking out three times, but ended up the hero when he homered off Boone Logan to lead off the 12th inning, giving the Cubs their margin of victory in a 6-5 win. After going 0 for 4 in his second game, Baez again grabbed the headlines on August 7th, when he connected for a pair of homers in a 6-2 win over the Rockies; he went 3-for-4 on the day, with 4 RBI. Three weeks after his debut, the Cubs brought up another one of their top prospects, Cuban outfielder Jorge Soler. He matched two of Baez's feats by also homering in his major league debut, doing so in his very first at-bat, and by also notching a multi-homer game in his third contest. Baez played 52 games for the Cubs in his debut season, hitting only .169 but with 9 homers and 20 RBI in 213 at-bats. He split his time almost equally between shortstop and second base.

In 2015, he played 70 games at Iowa, hitting.324 with 13 homers and 61 RBI in 70 games. He missed time due to injury and played 4 games with the AZL Cubs on a rehabilitation assignment. He was passed on the Cubs' depth chart at shortstop by another top prospect, Addison Russell, who was called up in May and spent most of the season in Chicago, doing well. Baez had to wait until September 1st to return to the majors. He played 28 games down the stretch, hitting .289 with a homer and 4 RBI. The Cubs had made a remarkable turnaround under new manager Joe Maddon, reaching the postseason as the second wild card team, and Baez was on the postseason roster as a backup infielder. He did not see any action in the Wild Card Game, but in the Division Series against the St. Louis Cardinals, he replaced an injured Russell in Game 3, then in Game 4 on October 13th hit a three-run homer off John Lackey in the bottom of the 2nd inning. The Cubs went on to win the games and the series, and he started all four games of the NLCS against the New York Mets. He only went 1 for 10 as the Cubs were swept by the Mets.

In the 2015-16 offseason, he played for the Santurce Crabbers of the Puerto Rican League. He spent some time in center field, as the Cubs were looking to increase his versatility in order to give him more playing time. They were projecting Javy as a Ben Zobrist-type player, able to fill in where needed at various infield and outfield spots. On May 8, 2016, he hit a walk-off homer in the 13th inning against Blake Treinen of the Washington Nationals to give the Cubs a 4-3 win and a series sweep. On September 26th, he hit a grand slam and drove in 6 runs to lead the Cubs to a 12-2 win over the Pittsburgh Pirates, their 100th win of the season. He had a coming out in the postseason, as he was the Cubs best hitter over the first two rounds. This included a game-winning homer against the San Francisco Giants in Game 1 of the Division Series and being co-winner of the NLCS MVP Award with pitcher Jon Lester, bringing the Cubs to the World Series for the first time since 1945.

In 2017 Baez played 145 games split almost equally between second base and shortstop. He again batted .273, this time with 24 doubles and 23 homers, and scored and drove in 75 runs. He was blanked in the Division Series against the Washington Nationals, going 0 for 14, then was 2 for 12, with both hits homers, as the Cubs lost to the Los Angeles Dodgers in the NLCS. In 2018, now playing mainly second base, he had some quirky statistics after 10 weeks, mainly pertaining to how few walks he was drawing: just 7 in his first 233 plate appearances. Despite that, he had hit 14 homers and was leading the National League with 46 RBI. No batter had ever hit twice as many homers as he had drawn walks over a full season, but he was in danger of doing so if he kept up his current ratios. He did draw a few more walks, finishing with 29, but did have more homers, with 34 in 160 games. He also hit 40 doubles and 9 triples, batted .290, led the NL with 111 RBI, scored 101 runs and stole 21 bases. He was an All-Star for the first time, won a Silver Slugger Award at second base, and finished second behind Christian Yelich in the MVP vote in what was truly an outstanding season. However, the Cubs made an early exit from the postseason, losing the Wild Card Game to the Colorado Rockies in extra innings; he went 1 for 5 with a double, a walk, an RBI and a stolen base in that game.

Baez was back among the National League's élite in 2019, still not drawing many walks, but bashing the baseball with tremendous authority. On June 23rd, his three-run homer off Seth Lugo of the Mets in the 8th inning turned a 3-2 deficit into a 5-3 win, and was also the 100th long ball of his career. He returned to the All-Star Game and had hit 29 homers by the end of August when he suffered a hairline fracture of his thumb sliding into second base on September 1st. He missed the next few games, and the prognosis was that he would be out for the remainder of the season, dealing the Cubs' playoff hopes a big blow. There was hope he could return in time for a Cubs postseason run, but the Cubs were eliminated from contention in the season's final week.

Baez was bestowed a rare honor after the World Series, as the City of Chicago decided to name a street after him. Javier "Javy" Baez Way is located in the city's 28th Ward, in Humboldt Park, and leads to a little league baseball diamond. It crosses Luis Munoz Marin Drive, named after the first elected Governor of Puerto Rico, and Baez's name was chosen in order to honor another role model for Chicago's Puerto Rican community.