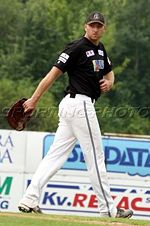 Pavel Budský was the first minor league player who was born in and raised in Czechoslovakia. He has led the top Czech league in almost every category, including leading in both ERA and home runs in the same season.

In 1987, Budský and some friends developed an interest in baseball but had a hard time finding anyone who could help teach them the game; previously, Pavel had played softball. He was able to find a local trainer, Tomas Vavrusa. Budský developed as a slugger and impressed MLB scouts enough to win a contract from the Montréal Expos. He never made it into a minor league game in the Expos system though.

Budský then caught on with the Kansas City Royals. The Royals decided to use the tall right-hander as a pitcher, though his fastball peaked in the high 80s. He was 2-1 with a 5.23 ERA for the 1997 GCL Royals, allowing 17 hits in 10 1/3 innings with just one walk. He struck out seven.

Pavel played for the Czech national team in the 1997 European Championship. He tied Glenn Romney and Alessandro Flisi for third in the round-robin phase of the event in runs (10) and tied for second in RBI (10). In the 1999 European Championship, he hit .421/.560/.579 with 7 runs and 5 RBI in five games in round one, while going 1-0 with a 3.00 ERA on the mound. He was 9th in average (between Evert-Jan 't Hoen and Valeri Platonov), 8th in OBP (between Elston Hansen and Alex Malihoudis), tied for 6th in RBI (with Andrea Castri, Andrea Evangelisti, Sylvain Hervieux, Roman Talda, Mike Crouwel and Hansen) and tied for 4th in runs (with Roberto De Franceschi, Daniel Newman, Antonio Salazar and 't Hoen). He then was 4 for 11 with a double in the second round and allowed no runs in 5 1/3 IP.

Budský was 2 for 18 in the 2007 European Championship with the lone Czech homer. He did not pitch in the tournament. In the 2008 European Cup, he hit .364/.391/.682 and tied for the lead with two home runs. He hit a game-winning bottom-of-the-9th homer to beat MGPU SYOS 42. He was their worst pitcher, going 0-1 with a 13.50 ERA and blowing a save opportunity in a loss to FC Barcelona, the eventual champs. In the qualifiers for the 2009 European Championship, Budský helped the Czechs advance by hitting .385/.467/.692, striking out all 3 batters he faced and getting a win. He was second in the qualifier in slugging. He did not win MVP honors as those went to teammate Petr Baroch.

Budský was 1 for 13 and ground into two double plays in the 2009 European Cup.