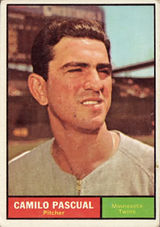 "He's got the best curve ball in the American League. His curve is simply great and he can throw it at different speeds." - Al Lopez, quoted in Baseball Digest from June 1959

Despite playing with generally bad teams during his career, Pascual won 15 games five times and 20 twice, 174 in all. Four years running (1961-64) he topped 200 strikeouts, back when that was a tough number to reach.

After his playing career ended, he was a Twins coach from 1978 to 1980. He later was a scout in Venezuela for the Los Angeles Dodgers.

His minor league and major league playing career ran from 1951-1971. In addition, he pitched Cuban winter ball for years with Cienfuegos, and was league MVP in the 1955-56 winter.

He is the brother of Carlos Pascual and the son of "Big Potato" Pascual. Camilo was part of the inaugural class of inductees in the Latino Baseball Hall of Fame in 2010.