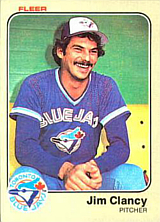 Jim Clancy played fifteen years in the majors, including a dozen with the Toronto Blue Jays, where he was one of the best pitchers in the club's formative days.

Originally selected by the Texas Rangers in the fourth round of the 1974 amateur draft, Clancy was chosen by Toronto in the 1976 expansion draft. He reached the big leagues midway through the team's inaugural season of 1977, going 4-9 in 13 starts, and became a mainstay in the Blue Jays rotation for more than a decade. Clancy won in double figures eight times while besting 200 innings five times, with the peak a 16-14, 3.71 record in 40 starts during an All-Star 1982. Remaining with Toronto through 1988, he won 128 games (third behind Dave Stieb and Roy Halladay in club history) and threw 2,206 innings (second behind Stieb). He is first in team history with 140 losses. After the 1988 season, Clancy became a free agent and moved on to the Houston Astros. After going 7-14 in his first year with Houston, he moved to the bullpen the following summer. Late in the 1991 season, he was dealt to the Atlanta Braves. He made his last big league appearances in the 1991 World Series, appearing in 3 games and earning the victory in Game 3.