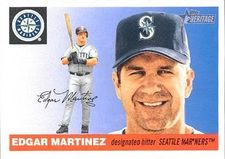 Edgar Martinez was a major star during his 18 years in the major leagues, posting an Adjusted OPS of 147, tied with Mike Schmidt and Willie Stargell at #45 on the all-time list. His lifetime averages would be a dream year for most players: .312/.418/.515. He ranks #21 all-time for career on-base percentage (just above Stan Musial), and #63 all-time for career slugging percentage (just above Willie McCovey).

Martinez was signed as a free agent for the Seattle Mariners by scouts Coco Laboy and Marty Martinez on December 19, 1982. He spent his entire career with the Mariners, playing from age 24 to age 41. He started as a third baseman, and couldn't find an everyday big league job until he was 27 years old. Most of the games during his career were as a designated hitter, which he did almost exclusively for the last nine years of his career. His best year was 1995, when he finished 3rd in the MVP voting, with a .356 batting average, 116 walks, 52 doubles, 29 home runs, 113 RBI and 121 runs scored. A model of consistency, he did not go more than eight at bats without a hit the entire year. His double to win the ALDS against the New York Yankees that October remains the most dramatic moment in the Mariners history.

Although Martinez never won an MVP award, he was a seven-time All-Star, and led the league twice in batting, three times in on-base percentage, twice in doubles, once in runs scored, and once in RBIs. Although not thought of as a slugger, Martinez had 309 home runs in his career, putting him at #100 on the all-time list. Although he never appeared in a World Series, he was a valuable contributor on the great 2001 Seattle Mariners that won 116 games during the regular season.

When he retired, he held two significant marks that were, ironically, surpassed on the same day by different players: on April 2, 2011, David Ortiz drove in his 1003rd run as a DH, surpassing Martinez's career RBI record at the position, and Ichiro Suzuki overtook him for most hits in Mariners history. Still, in 2004, just after his retirement, MLB renamed its annual award for the best DH as the "Edgar Martinez Outstanding Designated Hitter Award". He himslelf won the award five times before its change of name, which was a record until Ortiz came along.

His candidacy for the Hall of Fame runs into the obstacle that voters know how to evaluate players who hit 400+ home runs or had 3000+ hits, but Martinez has neither. Those voters are not so clear on how to evaluate a player like Martinez who had a .312 batting average (remember, Dale Mitchell hit .312 but was not seriously considered), with 2247 hits (Al Oliver was a batting champ with 2743 hits who was dropped from the ballot when he didn't get enough votes the first year of eligibility), 1219 runs scored, 1261 RBI, 309 home runs, and 514 doubles. None of those alone is enough to get in, so the question will be if the voters can evaluate the package as a whole. It should also be borne in mind by Hall of Fame voters that Edgar Martinez did not enjoy his first full season in the big leagues until the age of 27. Appropriate comparisons might therefore be made to other late bloomers who eventually made it to the Hall of Fame, such as the pitcher Dazzy Vance. In voting totals for the Hall of Fame released in 2010, Martinez received 36.2% of the vote; he fell to 32.9% in 2011 but bounced up to 36.5% in 2012 and fell back to 35.9% in 2013, his candidacy apparently stalled. He had another big fall in 2014, when almost all holdovers saw their vote total decrease because of a strong first-year class; he was at 25.2% and well down the list of candidates. He moved up slightly, to 27% in 2015, then moved up significantly, to 43.4% in 2016. In 2017, he passed the 50% threshold, with 58.6% of the vote, and putting him in very good position to be elected in his final two years of eligibility, especially as his cause was now espoused by a number of influential writers. He fell just 20 votes short of election in 2018, receiving 70.4% of the vote, making him a heavy favorite to cross the bar in his final year of eligibility. He did manage to clear the bar, with room to spare, in 2019, when he received 85.4% of the vote. He had the quote of the day at the induction ceremony held on July 21st in Cooperstown, NY. He explained that after teammate and fellow Hall of Famer Randy Johnson was traded to the Houston Astros in 1998, he gave an interview that Johnson did not like. The hard-throwing Johnson told him: "Next time I face you, I will drill you. Don't worry, it will hurt, but only for a minute."

On June 20, 2015, he was hired by the Mariners as their hitting coach, replacing Howard Johnson. The Mariners retired his uniform number, 11, in a ceremony held on August 12, 2017. After the 2018 season, he resigned as the major league hitting coach, opting instead to become an organizational hitting coach in order to have a more flexible schedule.

He is a cousin of Carmelo Martinez.

Among some of the distinctions and honors received by Edgar Martinez are the following: