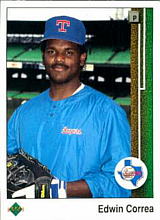 Ed Correa made his debut at 19 with the Chicago White Sox in 1985. He appeared in 4 games in relief and started the last game of the season on October 6th. He was then traded to the Texas Rangers and spent the next season and a half in the Rangers' starting rotation, making 47 starts and going 15-19 with a 5.10 ERA. His best career start was a shutout on May 2, 1986 against the New York Yankees: he gave up just 3 hits, walked 5 and struck out 9. He had control issues throughout his career, giving up 189 walks in 282 2/3 innings. Ed was a Seventh-Day Adventist and Texas would adjust their rotation to accommodate his religious beliefs so that he would not pitch on the Sabbath. Unlike "The Sundown Kid" Danny Thomas, whose career was ruined for his following their beliefs (among other things), Ed's career ended early because of arm trouble. After his playing career, Correa founded the Puerto Rico Baseball Academy and High School in Gurabo, PR. His brother, Ramser, pitched in the Milwaukee Brewers chain.