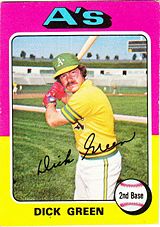 Dick Green was a steady but unspectacular second-sacker for 12 seasons for the Oakland A's during their heyday. In his post-playing days, he operated a moving company in Rapid City, SD, which he eventually sold to his partner.