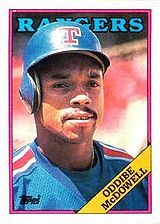 Oddibe McDowell, a muscular 5' 9" outfielder, was a high-profile player long before he hit the majors. A two-time All American at Arizona State University, he won the Golden Spikes award in 1984 when he hit .405 and slugged .788 with 31 stolen bases. He was a member of the United States National Baseball Team at the 1981 World Games (Gold), 1981 Intercontinental Cup (Gold) and 1984 Olympics. The 1984 team included Mark McGwire and Barry Larkin. He was inducted into the College Baseball Hall of Fame in 2011.

McDowell was drafted twice in 1981, twice in 1982, and once in 1983. He finally signed as a first round selection in the 1984 amateur draft by the Texas Rangers and scout Harley Anderson. Playing only 31 games at AAA Oklahoma City in 1985 - and hitting .400 with 8 triples - he was brought up to the Rangers for the rest of the 1985 season. He continued to be a sensation with the Rangers. Although he hit only .239 in 111 games, he was second on the team with 18 home runs and also second on the team with 25 stolen bases in 32 attempts. That season, he became the first Texas Rangers player to hit for cycle.

The next year, 1986, he raised his batting average to .266 and his on-base percentage to .341, but in spite of playing a full season he only hit 18 home runs, the same as the previous year. He stole 33 bases, but was caught 15 times. He scored 105 times, but struck out 112 times. It was to be the only season in his major league career when he played in over 150 games. That year, he broke up a potential no-hitter by Roger Clemens after 7 2/3 innings.

In 1987, he slumped to .241. His on-base percentage and slugging percentage remained mediocre. It was said that McDowell, a left-handed hitter, did not hit lefties very well. He had 14 home runs. One bright spot was that he stole 24 bases in 26 attempts.

1988 was a disaster, however. Starting slowly, he was sent to the minors for 18 games in June - back to the Oklahoma City 89ers, where he hit .286. In the majors, he appeared in 120 games during the season, hitting .247 with only 6 home runs. He stole 33 bases. The Rangers were ready to move him, even though he had just turned 26. On December 6 of that year, McDowell, Jerry Browne and Pete O'Brien were traded to the Cleveland Indians for Julio Franco. Franco was four years older than Oddibe abut didn't retire until the Spring of 2008, at age 49!

Oddibe lasted half a season with Cleveland in 1989 before being traded to the Atlanta Braves on July 2 for Dion James. With Atlanta, he hit .304, but got caught 10 times in 25 steal attempts. He did hit 7 home runs in 76 games with them. The following off-season, Bill James commented at length in his Baseball Abstract that the trade was an absolute steal for the Braves, given McDowell's tremendous talent and athleticism (James was a very middling player), but in hindsight, it's not clear that Cleveland got taken at all: in 1990, McDowell hit .243 with 7 home runs, and he was released at the end of spring training the following year. He signed with the Baltimore Orioles a couple of weeks later and spent most of the season with the AAA Rochester Red Wings before being released again on July 28.

During the spring of 1992, he signed with the California Angels. He played in six unimpressive games with the AAA Edmonton Trappers and was released on May 14. On July 13, he signed back with the Rangers and finished the season in class AA ball with the Tulsa Drillers.

After beginning the 1994 season with the Oklahoma City 89ers, he was called up to the big league Rangers in late April and spent the duration of the season in the majors, hitting .262 with 1 home run in 59 games. He still had some speed at age 31, stealing 14 bases in 16 attempts.

His last professional season, 1995, was spent with the Columbus Clippers in the New York Yankees chain. He appeared in only 14 games, hitting a mere .217 without a stolen base (one caught stealing).

Appearing primarily as an outfielder during his career, he had excellent range, but his arm was criticized. According to similarity scores, the most similar player to McDowell is his contemporary Daryl Boston, also a first-round pick of whom much was expected.

McDowell was the head coach of Everglades High School from 2010 to at least 2012.