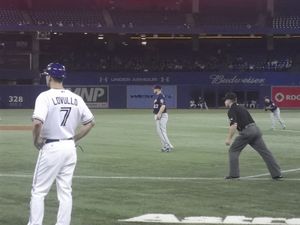 Lovullo watches over first base with the ump getting ready to make a call, October 2012 in Toronto.

In 2011, Torey Lovullo became the first base coach of the Toronto Blue Jays, after a 9-year career as a minor league manager. His last stop in the minors before joining the Jays was as manager of the Boston Red Sox's AAA farm team, the Pawtucket Red Sox; there he met John Farrell, the parent team's pitching coach, who offered him a job with the Jays when he was named the team's new manager. After the 2012 season, he followed Farrell back to Boston when John became the Red Sox's new skipper; Torey joined him as the team's new bench coach for 2013.

On August 14, 2015, Lovullo took over as manager of the Red Sox on an interim basis when John Farrell announced he needed to take a leave of absence to undergo treatment for cancer. The Red Sox were floundering in last place in the AL East at the time. They played much better under Lovullo's direction, going 28-20 the final month and half, but still finished in last place. Farrell's treatment went well, and he returned to his old job in 2016, but the success they had had playing under Lovullo continued as they went on to win a division title.

On November 4, 2016, he was named manager of the Arizona Diamondbacks for 2017, succeeding Chip Hale. This followed shortly on the heels of Arizona hiring Boston GM Mike Hazen to be their GM and the choice of Lovullo did not come as a surprise to anyone. He had an excellent first season with the club, leading the D-Backs to the postseason as the first National League Wild Card team. They then won the Wild Card Game against the Colorado Rockies before being swept by the Los Angeles Dodgers in the Division Series. He was named the NL Manager of the Year as a result of that excellent performance that exceeded all expectations.

On April 8, 2018, he celebrated his 100th win as a manager, even though he had been ejected from that day's game against the St. Louis Cardinals as part of a strange sequence of events. Things started when A.J. Pollock was displeased with a third-strike call, and Lovullo came out to protect his player from a possible ejection. However, in speaking with home plate umpire Tim Timmons, he used words that somehow triggered a strong reaction by Cardinals catcher Yadier Molina, who tried to start a fight with him, prompting a bench-clearing incident. Lovullo was tossed out for arguing balls and strikes, something a manager is not allowed to do, but Molina was allowed to continue, as recordings clearly indicated that Lovullo had used some pretty offensive language in complaining about the veteran catcher's pitch-framing prowess. A day later he explained that he had no beef with Molina and had meant to compliment his ability while taking Timmons to task for having been overly influenced by the catcher, although he recognized his choice of wording had been poor. Both he and Molina were handed a one-game suspension as a result of the incident. While the D-Backs faded after a strong start and eventually failed to make the postseason, Lovullo's work was appreciated by the front office, as in January 2019, he was offered a contract extension.

His son Nick Lovullo was drafted by the Red Sox in the 20th round of the 2016 amateur draft.