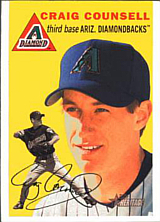 Infielder Craig Counsell is the son of former minor league outfielder John Counsell. A veteran of sixteen big league seasons, Craig became the manager of the Milwaukee Brewers in 2015.

Originally property of the Colorado Rockies, Craig was known for his unusual and extreme batting stance. He would stand at the plate on his toes, with the bat pulled as far up and back as humanly possible, high above his head, and would start his swing from this bizarre position. It worked for him, as he played 16 seasons, until the age of 40, even though he played only 3 major league games by the age of 25. In 1,624 games, he hit .255/.342/.344 while scoring 647 runs.

Craig is also well-known for his postseason performances. Following a 2-for-5 performance in the 1997 NLDS for the Florida Marlins, he gained regular at bats in the NLCS and World Series. Counsell first tied the deciding Game 7 of the World Series with a sacrifice fly off Jose Mesa of the Cleveland Indians in the 9th, then scored the winning run on Edgar Renteria's single off Charles Nagy to give the Fish their first world championship. Four years later, Craig was the starting second baseman for the Arizona Diamondbacks in the 2001 Fall Classic, when they upset the New York Yankees in seven games. Counsell was on base when Luis Gonzalez rapped his walk-off single against Mariano Rivera, putting Craig in exclusive company by being on base twice in a World Series walk-off. In fact, the walk-off hits by Edgar and Luis are the last two in Series history. Craig did not hit particularly well in either World Series, going 4-for-22 (.182) in 1997 and 2 for 24 (.083) in 2001. He was a beast in the NLCS both years, hitting .429 and .381 respectively and being named MVP of the 2001 NLCS.

Counsell's .990 fielding percentage at second ranked first in the National League in 2005. In his final season, 2011, playing for the Brewers, he went through an 0-for -5 slump in July and early August. At the time, it was considered to be one at bat shy of Bill Bergen's MLB record for futility set with the Brooklyn Superbas in 1909. Counsell's streak brought new attention to Bergen's, and on August 12th, SABR researcher Joe Dittmar announced Bergen's streak had in fact been of 44 at bats, meaning Counsell had tied the all-time record for futility. He did not keep that dubious honor for long, as the Los Angeles Dodgers' Eugenio Velez had a hitless season which extended his fruitless streak of at bats to 46 over two years, although Counsell still held the single season record. He played his last game in the 2011 NLCS.

Counsell got back in the game on May 4, 2015, when he was named the replacement for Milwaukee manager Ron Roenicke, who had been fired the previous day with the team sporting the worst record in the majors (7-18). It was his first managerial or coaching assignment at any level, but he already knew many of the players having played with them only a few years earlier. After retiring, he had worked as a special assistant to Brewers General Manager Doug Melvin, with his duties including some scouting and minor league instruction. He came into the managers's job with a thorough knowledge of the organization and its players, compensating for his lack of actual managerial experience. After not having been ejected from a single game during his playing career, he was tossed for the first time on July 27th, when he came out of the dugout to defend Carlos Gomez, who had been ejected for throwing his helmet after being caught stealing in the 9th inning of a 4-2 loss to the San Francisco Giants. Craig came out to argue that the punishment handed to Gomez was excessive and was tossed.

In his first full season as manager in 2016, the Brewers had a forgettable year as they finished in fourth place, well off the pace, but the team's top brass was evidently satisfied with his work. On November 11th, they signed him to a three year contract extension. In 2018, he led the Brewers to within a win of the World Series, bowing out in seven games to the Los Angeles Dodgers in the NLCS. During the postseason, he was noted for the creative use of his pitching, using a bullpen game on a couple of occasions and relying heavily on his relievers in the absence of top line starting pitching. He took the Brewers back to the postseason in 2019, as they played the Wild Card Game against the eventual champs, the Washington Nationals. The Brewers had a lead late in the game before the Nats came back to win, 4-3. Following the season, he was given a new three-year extension taking him to 2023.

Craig holds a degree in accounting from the University of Notre Dame.