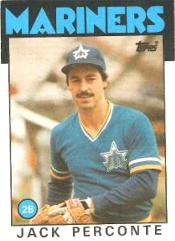 Jack Perconte played seven years in the majors, including as a regular with the Seattle Mariners, stealing around 30 bases each year in the two years he was with them. His son Mike Perconte pitched as high as AA.

Perconte was drafted by the Los Angeles Dodgers in the 16th round of the 1976 amateur draft, and after a successful minor league career, he had a couple of cups of coffee with them in 1980 and 1981. Los Angeles won the World Series in 1981, but Perconte did not appear in it. He spent most of 1981 with the Albuquerque Dukes, hitting .346.

Traded with Rick Sutcliffe to the Cleveland Indians, he appeared in 93 games with them in 1982, hitting .237. The following year he was up for only 14 games. After the 1983 season, he was traded with Gorman Thomas to Seattle for Tony Bernazard.