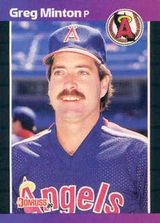 Greg Minton grew up in San Diego, CA, where his main hobby was surfing. When his father told him that he wasn't going to pay for Greg's college, Greg decided to take up baseball to try to get an athletic scholarship ("I knew brains weren't going to get me there," he said). Weighing only 148 pounds, he got a job as the shortstop for San Diego Mesa College. There, he made an impression with his strong but erratic arm. As he writes, "[T]he seats behind first base were considered a combat zone." The Kansas City Royals picked him in the third round of the January 1970 amateur draft.

Minton was converted by the Royals into a pitcher, being informed about it by John Shields. In his first game in winter instructional league, he got the signals from his catcher, but only had one pitch, a fastball, so threw it regardless of what was called for. The Royals later taught him to throw a curveball - "my curveball didn't break at all, but it was great fun trying to throw it." He went 1-4 with two saves and a 3.15 ERA for the Billings Mustangs that first year. In 1971, he moved up to the Waterloo Royals and had a 11-6 year with a 3.05 ERA and one save. He then was with the 1972 San Jose Bees, where he struck out 153 in 178 innings and went 12-12 with a 3.94 ERA and 11 complete games. Minton says "[l]ooking back on it, imagine what I could have done down there if I had had any idea what I was doing." In 1973, the Royals traded him to the San Francisco Giants for Fran Healy.

Minton then spent the next six years primarily with the Phoenix Giants as his 92-93 mph fastball lacked movement and was smacked around by big-league hitters. In Phoenix, Greg picked up his "moonman" nickname after he got horribly sunburned after going tubing naked. When manager Rocky Bridges saw him that night, he said that Minton's body had more craters than the moon. Bridges would be Minton's manager for many years. Once, Rocky pinch-ran Minton at third base for a slower runner, saying he wanted to get Greg to score one run that year. In another game, Minton had allowed "something like seven runs" in one inning and with the bases loaded, Bridges approached the mound - to tell Greg that he would be going to his office to do paperwork and to let him know if and when the inning ended.

Greg was 5-11 with four saves and a 4.50 ERA for the 1973 Amarillo Giants and made the first five of his many appearances for Bridges' Phoenix club. In 1974, Minton actually did not appear in Phoenix. He had a 1-4, 5.90 line for Amarillo and spent most of the year back in A ball, going 10-1 with a 2.25 ERA for the Fresno Giants. He would have been second in the California League in ERA had he tallied enough innings to qualify.

Minton tore the cartilage in his knee on the last day of spring training in 1978 and was placed on the disabled list. When he returned, the Giants had him pitch batting practice - and catcher Mike Sadek noted that Greg suddenly had movement on his pitches. As his knee was still store, he reduced his leg kick and adjusted his delivery so that the ball would sink; he credits his sinker with his success in the majors. Saying he didn't know much about mechanics, "I throw the ball, and if it doesn't go down, I say 'Gee,' and start reading the employment pages." Minton's last year in Phoenix came in 1978 and he was 7-4 with a 4.50 ERA.

Greg became a regular reliever in the majors when Randy Moffitt became unable to pitch. He would later comment "The Giants are paying me millions of dollars to pitch a few innings every couple days. And they think I'm crazy!" His flaky reputation came from stunts like stealing the team bus or the keys to the bullpen car. Minton went 4-3 with four saves and a 1.81 ERA for the 1979 Giants and did not allow a homer. The sinkerball specialist went 270 1/3 innings between homers, giving one up to Joe Ferguson in 1978 and none again until May 2, 1982 when John Stearns took him deep. He held the MLB record for games pitched in a season without allowing a home run until George Sherrill broke out in 2006.

In 1983, Minton was third in the league in saves behind Lee Smith and Al Holland and went 7-11 with a 3.54 ERA and 22 saves. That year, teammate Gary Lavelle had 20 saves for the Giants as the two formed a highly-effective lefty-righty duo for manager Frank Robinson; it was the first time in MLB history that two teammates had each saved at least 20 games and was a major reason for the Giants unexpectedly hanging in the NL West pennant race until the season's last day. He signed a contract for $750,000 a year, his hand shaking so much he almost couldn't write his name. Bob Lurie, the team owner, told him that if he didn't want so much money, he didn't have to take it.

Minton managed the 1995-1996 Lubbock Crickets, taking the Texas-Louisiana League title in the team's first season. He was a coach for the Midland Angels in 1997, Vancouver Canadians in 1998, and Cedar Rapids Kernels in 1999.

Main Sources: The Fall of the Roman Umpire by Ron Luciano, 1971-1979 Baseball Guides