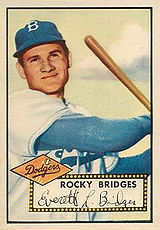 Light-hitting, utility infielder Rocky Bridges played in the majors for eleven season and was an all-star with Washington in 1958, but he is perhaps better remembered as a long-time minor league manager and big league coach. He was also noted for his ability to come up with funny one-liners. 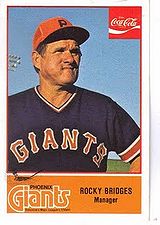 Born in Texas, Bridges grew up in Long Beach, California. He was first signed by the Brooklyn Dodgers and began his pro career with the Santa Barbara Dodgers in 1947. After successful campaigns with the Montreal Royals in 1949 and 1950, he reached the bigs with Brooklyn in 1951. He hit .254 in 63 games as a rookie, mostly backing up Billy Cox at third base. After two seasons with the Dodgers, he was dealt to the Cincinnati Reds in early 1953 as part of a four-team trade that sent Joe Adcock to the Milwaukee Braves and Earl Torgeson to the Philadelphia Phillies. He was the Reds primary second baseman in his first year with the club, but he saw less playing time in several more seasons there.

Acquired by the Washington Senators early in the 1957 campaign, Bridges once again became a regular, primarily playing shortstop. The following season, he hit .297 with 5 home runs in the first half and was selected to the All-Star Game. However, he trailed off in the second half, hitting just .160 in 38 games, and that winter was traded to the Detroit Tigers. He split the 1960 season between Detroit, the Cleveland Indians, and the St. Louis Cardinals before ending his playing days with the expansion Los Angeles Angels in 1961.

After his playing days, Bridges was an Angels coach in 1962 and 1963 before spending the next four years managing in their farm system. He was back with the club (now the California Angels in 1968, a role he filled for four more seasons, until 1971. He then managed in the San Diego Padres chain for two summers before joining the San Francisco Giants organization. With San Francisco, he managed the Phoenix Giants for nine years, winning the Pacific Coast League title in 1977. He then spent time as a Giants scout and as a member of their coaching staff in 1985. He ended his career by managing in the Pittsburgh Pirates system from 1986 to 1989. Overall, in 21 years as a manager, he compiled a record of 1300-1358.

"He was one of the most colorful managers I played for. He had a unique ability about him. He never put pressure on anybody. At times I put a lot of pressure on myself. He did a terrific job of calming me." - Casey Parsons

Bridges was known for his ability to come up with hilarious one-liners. Greg Minton recounts that during one minor league game, where he had "given up something like seven runs... and the bases were still loaded", Bridges came up to him and said "I'm gonna go into my office and fill out reports. If this inning ever gets over, you come in and get me."