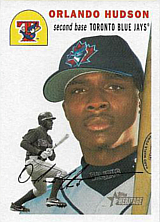 Orlando Hudson hit .429/.467/.571 with 7 steals and 12 runs in 10 games for Team USA in the 2001 Baseball World Cup to help them to a silver medal. He led the tournament in runs and was third in steals (one behind Ralph Milliard and Trent Durrington). He failed to make the All-Star team at second base as veteran Cuban star Antonio Pacheco got the nod.

Hudson was not much of a prospect at first, having been drafted by the Toronto Blue Jays in the 43rd round of the 1997 amateur draft. However, he worked his way up the minor league ladder and reached the majors with the Blue Jays in July of 2002. He immediately became the team's starting second baseman and would remain a major league regular almost until his last game, at the end of the 2012 season. He was a solid hitter, hitting .275 with a lot of extra-base hits for a middle infielder, and coupled that with excellent defense at second base that earned him four Gold Gloves over the course of his career. He moved around a bit; after playing with Toronto from 2002 to 2005, he was with the Arizona Diamondbacks for three years (2006-2008), the Los Angeles Dodgers in 2009, the Minnesota Twins in 2010, and the San Diego Padres in 2011 and 2012, before finishing up with a few games with the Chicago White Sox at the end of 2012.

As a rookie, he became infamous for a quote he uttered in spring training with the Blue Jays in 2002. Speaking of new General Manager J.P. Ricciardi, he said: "When I first met J.P., I thought, 'Smooth car - smooth-lookin' cat.' He looks like a pimp back in his day. He's a good dude." It was apparently meant as a compliment, but Ricciardi did not take it too well and Hudson was sent down to the minors the next day, delaying the start of his big league career by a few months. Ricciardi and Keith Law, who was close to him at the time, later explained that the quote had nothing to do with the decision to send Hudson down: he had had a poor spring, and while the Jays were weak at second base, they simply felt he needed more seasoning in the minors to be ready for The Show. Law claimed that the affair was simply blown up out of all proportion by the media.

Hudson first became eligible for election in the Hall of Fame in the 2018 Hall of Fame Election but did not receive a single vote.