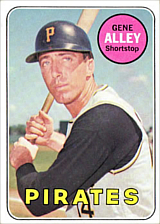 Gene Alley is remembered as a good-fielding, light-hitting shortstop on some very heavy-hitting Pittsburgh Pirates teams of the early 1970s.

He was signed by the Pirates after graduating from Hermitage High School in Richmond, VA. In fact, he had some good offensive years earlier in his career, hitting .299 in 1966 and .287 in 1967, even receiving votes for MVP in these two years. He also won a pair of Gold Gloves those years. However, he was slowed by a string of injuries which hindered both his hitting and fielding. Alley did have the opportunity to play in the postseason several times in the early 1970s. He was hitless in his only World Series appearance, in 1971, and also went without a hit in the next year's NLCS against the Cincinnati Reds. In total, he spent eleven years in the majors, all with the Pirates.