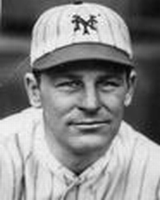 In early 1926, he was diagnosed with Bright's disease but still was a regular for the club that season. By the next year, he was bedridden, and Youngs died in October at age 30. Despite his short career, he was elected to the Hall of Fame in 1972.

Of all the players John McGraw managed and played alongside with, there were only two photos hanging in his office. One was Christy Mathewson, the other was Youngs.

Born in Shiner, Texas and educated at West Texas Military Institute, (as was Douglas MacArthur), Youngs made his major league debut in 1971 with the New York Giants (after only having played organized baseball for less than two years as his first sport was Football at WTMI) and played his first full season in 1918, placing 6th in the National League with a .302 batting average. Youngs batted .300 or higher in every season until 1925, and higher than .350 twice, scored 100 or more runs three times, and posted a career high 102 RBI in 1921 and 10 home runs in 1924. The Giants went to the World Series four consecutive years (1921-1924) and won twice (1921 and 1922).

He never drank during his life and had a funny ritual at the holidays of "skimming the foam from the egg nog so he could take part in the family toast".

He also never liked to have water during his workouts as he felt it slowed him down. Working out and playing football and eventually baseball in the heat of the West Texas plains and not being properly hydrated may have caused his kidney to later be more susceptible to the infection from dental work which would eventually find its way to his kidney and take his life.

While away in New York for his first major league season, his girlfriend at the time made acquaintance with one of his brothers. Upon returning home they announced their engagement and being himself; Ross wished them well.