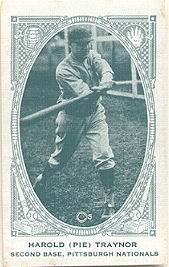 Inducted into Hall of Fame in 1948

"Among those who saw him play, McGraw, Ty Cobb, Rogers Hornsby and Paul Waner all stated that Traynor was the best third baseman of all time." - from The Pittsburgh Pirates Encyclopedia

Pie Traynor was widely considered the top third baseman in the history of baseball prior to the rise of Eddie Mathews. A career .320 hitter, when he was elected to the Hall of Fame in 1948 he beat out Al Simmons, Charlie Gehringer, Jimmie Foxx, and over 25 others later enshrined in Cooperstown.

There is a tendency among baseball fans to discount Traynor's accomplishments when comparing him to successors who variously fielded better, hit with much more power, and or did both better. Traynor, however, was a product of his time, long before third base became a "power" position. Prior to Mathews, Brooks Robinson, Mike Schmidt, George Brett, and Chipper Jones, the good fielding/high average Traynor was generally considered the best the sport produced from 1876-1950. Modern fans would find a more appropriate parallel in Hall of Famer Wade Boggs, a five-time batting champ who however walked much more than Traynor.

Traynor apparently acquired his unusual nickname from his love pies as a kid. One of seven siblings, he had a variety of jobs as a youth, the most interesting being a railroad car checker checking cars loaded with explosives. He tried to enlist in the US Army both in 1917 and 1942 but was turned down both times.

Prior to reaching the majors he played in the Cape League in 1919 and the Virginia League in 1920. He spent his entire career in National League, considered the tougher for hitters in his day, all of it in difficult to homer Forbes Field. Ten times in his thirteen full seasons he topped. 300 in batting, peaking at .366 in 1930. An indication of how highly regarded Traynor was among his contemporaries is that even as he was winding down his time as a starter he was still good enough to be selected as an All-Star in baseball's very first Mid-Season Classic in 1933 and again the next year, his last two full campaigns. Six times voters placed him in the top ten in MVP balloting. While he rarely led the league in any offensive category, his .320 career batting average was #36 all-time among 20th Century players when he retired. His 164 triples stand #30 all-time today, and his 1273 RBI #120.

Traynor achieved all of this in an era when third base was considered a defensive position and second an offensive one. The emergence of the double play and relative decline of bunting as a key baseball strategy in favor of the long ball caused the roles to switch. What stars there were, such as Stan Hack, and Willie Kamm, typically got little respect for their efforts.

One example of how different the position was regarded and the game played in Traynor's day were his 35 sacrifices in 1927 and 42 in 1928, at the very peak of his batting prowess. In his entire career future Hall of Famer Chipper Jones sacrificed 3 times.

Traynor was a player-manager for the Pirates in 1934-35, managed only in 1936, then gave himself just a token dozen at-bats in 1937 before hanging up his spikes for good. He managed two more years, finishing as high as second in 1938 during his six year stretch at the Buc's helm. He served as a Pittsburgh scout from 1940 until his death. He was an announcer for much of the 1950s and 1960s, beginning with baseball then adding pro wrestling. He never learned to drive, and loved to walk everywhere. Once in New York City to report on the World Series he walked 127 blocks from his hotel to the stadium.

He died of emphysema due to smoking, but after being diagnosed continued to live his life normally.