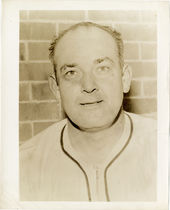 The most similar players to Davis, according to the similarity scores method, are Smoky Burgess and Don Slaught.