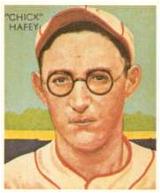 "I always thought that if Hafey had been blessed with normal eyesight and good health, he might have been the best righthanded hitter baseball had ever known." - Branch Rickey

Hall of Famer Chick Hafey had a very short career by Hall of Fame standards with only 1,466 lifetime hits, but what he accomplished was done in spite of constant health problems and bad eyesight. He had severe sinus problems and headaches. His sinus problems required him to undergo several operations which apparently had some effect on his eyesight. He said his eyesight changed from day to day, so he had several pairs of glasses that he used. He was beaned a number of times early in his career, and that may have contributed to his problems.

Brother of Albert Hafey. Cousin of Bud Hafey, Tom Hafey, and Will Hafey.