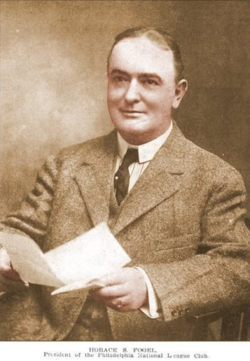 Fogel was a sportswriter for the Philadelphia Press best known as a baseball authority for Philadelphia newspapers, who, unfortunately for the cities of Indianapolis, New York and Philadelphia, realized his dream of becoming a manager and then a president of a ball club, thanks to his friendship with John T. Brush, the owner of both the Hoosiers and the Giants. Although he was merely inept as the pilot of the Hoosiers in 1887, he came close to aborting a Hall of Fame career when, as manager of the New York Giants, he tried to move Christy Mathewson to first base. Even when he was officially fired 41 games into the season, he still hopped back into the dugout from time to time to call the plays - and to get a closer look at his successor Heinie Smith's rival inspiration that Mathewson belonged at shortstop.

After being cast aside by the arrival of John McGraw in New York, Fogel returned to his pen and notebook, serving briefly as president of the Atlantic League, until resurfacing in 1909 as the front man for a business consortium taking over the Philadelphia Phillies. His first insight in his new position was that the club shouldn't be called the Phillies (or the Quakers, as they had also been known), but rather the "Live Wires". To promote this cause, he gave away thousands of watch fobs that featured the image of an eagle holding sparkling wires.

Mainly thanks to the pitching of Grover Cleveland Alexander, Fogel's Phillies (as fans adamantly continued to call them), weren't the worst team in the league; Fogel himself, however, had doubts about what was the best team. After one too many drunken accusations that the Giants had beaten the Chicago Cubs in 1912 mainly because St. Louis Cardinals manager Roger Bresnahan had not fielded his best nine against his former Giants teammates and because league umpires were pro-New York, he was summoned to a meeting with National League President Tom Lynch to back up his charges. When he couldn't, he was banished for having "undermined the integrity of the game". Bresnahan was also ill-advisedly removed from his position.

He died at age 67 from a stroke after being in poor health his last six years on November 15, 1928 at Philadelphia, PA and is buried at Mount Peace Cemetery in Philadelphia.

For a full Bibliography from SABR's The Baseball Index (TBI)