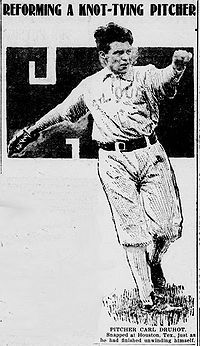 Carl Druhot pitched 20 games in the National League in 1906-07, most of which were starts. He also hit .231, which wasn't terrible for a pitcher - the team for whom he had the most plate appearances, the 1906 Cardinals, hit .235 as a team. He had previously gone 18-9 for the Bellingham Gillnetters in 1905 before coming to the majors.

In March 1906, it was stated in Sporting Life that he weighed 130 pounds. There were concerns on the part of his manager in Waco that he might not be big enough to pitch, so he could be used in the outfield as he seemed to be able to hit. However, he came to the majors in April, 1906, and the minor league database doesn't show him appearing for Waco either as a pitcher or as a position player.