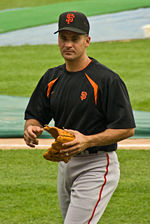 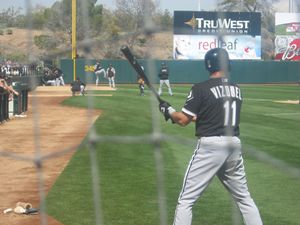 Shortstop Omar Vizquel played 24 seasons in the major leagues and set a number of longevity records at shortstop. He was originally signed as a free agent for the Seattle Mariners by scout Marty Martinez on April 1, 1984.

Vizquel won nine Gold Gloves with the Cleveland Indians. In 2005, he won his first National League Gold Glove while playing for the San Francisco Giants and repeated the feat the following season. He has the best fielding percentage for a shortstop in history, and in 2007, passed Ozzie Smith for most double plays. Vizquel tied and passed fellow Venezuelan Luis Aparicio for career games at the position in the two games of a May 25, 2008 doubleheader against the Florida Marlins. In 2009, Vizquel became the third player in major league history to play shortstop at age 42, following Luke Appling (1949) and Honus Wagner (1916). That season, he also passed Aparicio for most hits by a player born in Venezuela.

Vizquel had over 12,000 major league plate appearances, putting him at #17 on the all-time list when he retired. Most of the players near him on the list are in the Hall of Fame.

Vizquel is a drummer who did a rendition of the Goo Goo Dolls' "Broadway" on a CD of songs performed by baseball players.

When Omar signed with the Chicago White Sox for 2010, he requested #11, which had been retired by the club in honor of Aparicio. Aparicio agreed to have it brought back into use since Vizquel would be the player wearing it. He signed with the Toronto Blue Jays for 2012 for what would be his final season and made the team out of spring training as a utility infielder. At 44 (with a birthday less than a month from Opening Day making him officially 45 for the season), he was the oldest position player in the major leagues and one of the 50 oldest players ever. The records show that Vizquel's first career appearance in left field came on April 5th, in his first game for the Blue Jays, for just one batter. This is technically correct; however, Vizquel was positioned as a fifth infielder as part of a defensive shift. On May 6th, he became the oldest player to be used at shortstop, beating out Hall of Famer Bobby Wallace, who had been 44 when he last played there for the St. Louis Cardinals in 1914. It was only his 7th appearance of the season, and he was barely hitting .133 at the time; he played 10 games at short that year. In his final game, Brett Lawrie let Little O wear his old #13 - Vizquel had worn #17 all season - and he got the start at shortstop, where he hadn't played since July 27th. He singled in his final at-bat against Alex Burnett; he was pulled from the game in the 9th inning to a standing ovation.

Vizquel retired after the 2012 season and a few months later was hired by the Los Angeles Angels of Anaheim to be a roving minor league infield instructor. In 2014, he was named first base coach of the Detroit Tigers under new manager Brad Ausmus. That year, he was also inducted into the Cleveland Indians' Hall of Fame. He was let go along with other members of Ausmus's staff following the 2017 season. In 2018, he joined the Chicago White Sox organization as manager of the Winston-Salem Dash in the Carolina League. In 2020, he moved to the Mexican League was manager of the Toros de Tijuana.

Vizquel first became eligible for the Hall of Fame in the 2018 Hall of Fame Election. While his profile was very comparable to that of Ozzie Smith - an outstanding defensive shortstop with longevity and limited offensive production - he did not have the aura that the "Wizard of Oz" had had during his career and was unlikely to find the road the Cooperstown a smooth one. Other comparable players in the Hall are Rabbit Maranville and Luis Aparicio. His candidacy got off to a good start, with 37% of votes, making him the highest-placing first-year candidate from that year apart from the two who had been elected, Chipper Jones and Jim Thome. In 2019, he continued to move up, to 42.8% and broke the 50% mark in 2020 when he was named on 52.6% of the ballots, making him a very strong candidate for eventual election. However, in December 2020, his wife Blanca filed for divorce and accused him of domestic abuse, both physical and psychological dating back years. She had already accused him on previous occasions, prompting police to intervene, but she withdrew her accusations at her husband's behest, she later explained. Because most of the alleged violence took place while Vizquel was working in organized baseball, MLB immediately announced that it was opening an investigation. The allegations clearly hurt him, as his support fell to 49.1% in 2021, in spite of a weak ballot that saw no one being elected. More bad news came in August 2021 when he was sued for sexual harassment by a former bat boy of the Birmingham Barons, the allegations dating to his year as manager of the team in 2019. This led to a huge drop in his vote total in the 2022 Hall of Fame Election, all the way to 23.9%, pretty much dooming his chances. In 2023, he was the only one among the leading candidates to see his vote total drop, falling to 19.5%, as his moment was now clearly behind him.