Inducted into Hall of Fame in 2013 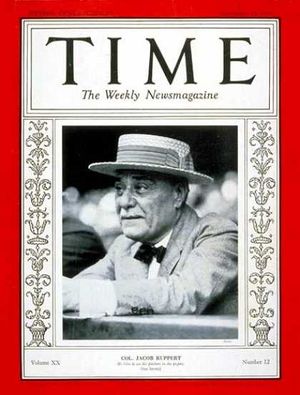 On the cover of Time.

The son of a brewing magnate, Jacob Ruppert, also called Colonel Ruppert or Jake, was already a well-known figure when he purchased the New York Yankees in January 1915. Ruppert briefly served in the National Guard, earning the title Colonel. He also served in four terms in the United States Congress from 1899 to 1907.

In 1920, the Yankees purchased Babe Ruth from the Boston Red Sox. In some accounts, Ruppert was known to dislike the Babe for his drinking and off-field behavior. Ruppert also oversaw the construction of Yankee Stadium in 1923. He owned the Yankees until his death in 1939, overseeing the franchise during one of its most glorious eras, during which the team won 9 pennants and 6 World Series titles.

He is buried at Kensico Cemetery in Westchester County, New York, the same cemetery that is the home to the remains of Lou Gehrig. A ballpark named after him can be found in Newark, New Jersey.

Ruppert's name was on the 2013 Hall of Fame ballot in which the Veterans Committee examined candidates from the pre-integration era. He was one of three persons elected on December 3, 2012. Ruppert was represented by a grandniece, Anne Vernon, when he was inducted into the Hall of Fame on July 28, 2013.