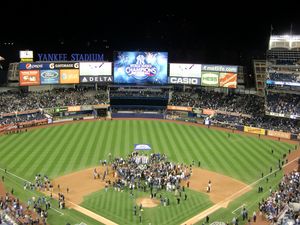 The 2009 New York Yankees, who had 103 wins and went on to win the 2009 World Series, were one of the winningest Yankee teams of the last 40 years. In that period, the only Yankee team with more regular-season wins were the 1998 edition; a couple of other teams reached 103 wins. The 2009 team played 18 straight games without an error at one point, breaking the major league record of 17 set by the 2006 Boston Red Sox.

The team was led by manager Joe Girardi, a former Yankee player, in his second year as Yankee manager. He had missed the playoffs in 2008 and was under pressure to return the team to the postseason. 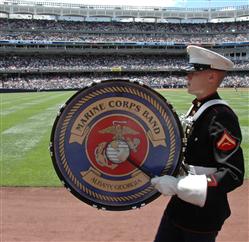 The Marine Corps band plays at the July 4th game against Toronto.

The Yankees made a big splash in the off-season by signing three of the most sought-after free agents on the market, all for huge contracts. First baseman Mark Teixeira was signed from the Los Angeles Angels of Anaheim after a bidding war with the Red Sox and Baltimore Orioles, while starting pitchers CC Sabathia and A.J. Burnett came from the Milwaukee Brewers and Toronto Blue Jays respectively. Another less-heralded acquisition, OF Nick Swisher, brought over in a trade with the Chicago White Sox for Wilson Betemit, proved just as valuable as the three headliners, providing power and on-base percentage to the bottom of the line-up. Gone were RF Bobby Abreu and 1B Jason Giambi, who left as free agents, and pitcher Mike Mussina, who retired after posting the first 20-win season of his career. Also in the off-season, controversy swirled around superstar 3B Alex Rodriguez, when it was revealed through leaked grand jury testimony that he had tested positive for steroids in 2003. Rodriguez claimed it was a one-time mistake, but a biography published in April further stoked the flame by claiming he had been a user since high school, something the player vehemently denied, with supporting testimony from former teammates.

The Yankees were moving into a brand new $ 1.2 billion ballpark in 2009, the New Yankee Stadium, built adjacent to the site of the hallowed House that Ruth Built. However, the season started off on the wrong foot. Rodriguez missed the first month with a hip injury, catcher Jorge Posada also missed playing time early, while OF Xavier Nady suffered a season-ending shoulder injury in the season's first days. The team sputtered on the field, with starting pitcher Chien-Ming Wang and the bullpen - apart from closer Mariano Rivera - off to rough starts. There was dismay over the ease of hitting home runs at the new ballpark, gnashing of teeth over empty seats behind home plate (the rest of the stadium was full though, but the top-end seats priced at around $ 2000 a game were a bit too rich as the United States were mired in their worst economic slump in decades). By the end of April, the Yankees had fallen a number of games behind the surprising Blue Jays and the ever-solid Red Sox, with the Tampa Bay Rays trading with them for 3rd and 4th place in the AL East. However for all the apocalyptic headlines in the New York papers, the Yankees were still playing around .500. 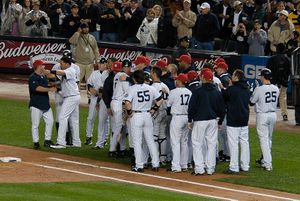 Things changed when Rodriguez returned to the line-up, although it took A-Rod a while to reach his normal level of production after homering in his first at-bat of the season. The Yankees began to win, and stopped losing. A dominant team at the bat, they had a regular lineup which almost completely had OPS+ scores over 120. Shortstop Derek Jeter was touted as a top candidate for the MVP award during the latter part of the season, while Teixeira led the team in homers and RBI. Oldsters Posada (37), Johnny Damon (35) and Hideki Matsui (35) continued to contribute, each topping 20 homers.

Among the pitchers, Sabathia was the top starter, collecting 19 wins to Burnett's 13. Veteran Andy Pettitte was the third starter, in front of young Joba Chamberlain who alternated between brilliant starts and bouts of inconsistent control. Fifth starter was a problem spot throughout the season, as Wang flamed out, young Philip Hughes was moved to the bullpen where he became a solid set-up man, and retreads Chad Gaudin and Sergio Mitre pitched like retreads. In the bullpen, the 39-year-old Rivera continued his amazing relief career. Most pitchers on the team had records over .500, with Alfredo Aceves notably going 10-1.

The Yankees caught the Red Sox in early August and never looked back. They won 9 of the last 10 head-to-head meetings with their traditional rivals, while feasting on all other opponents. They finished with the best record in major league baseball and set a franchise record with 243 home runs on the season, in part thanks to their new hitter-friendly ballpark. 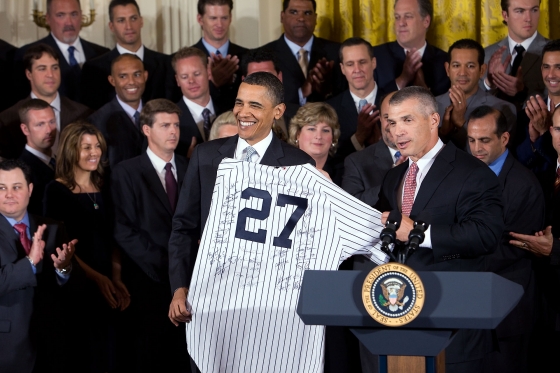