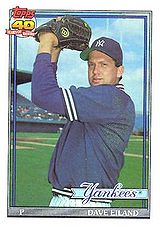 Dave Eiland was signed as a 7th round pick in the 1987 amateur draft by the New York Yankees and scout Jack Gillis. As a pitcher, Dave epitomized 'pitching to contact' and as a result owns one of the worst "K/9" averages in major league history for a pitcher with his amount of innings worked. At his worst, Eiland managed to strike out only 18 hitters over the course of an entire season in which he pitched in over 72 innings of baseball.

Eiland appeared in the movie For the Love of the Game, playing the fitting role of "Yankees Relief Pitcher."