The 2009 Toronto Blue Jays took on the Detroit Tigers at the Rogers Centre on April 6 in the 2009 season opener, thumping the Tigers 12-5. Roy Halladay was matched up against Tigers pitcher Justin Verlander. Halladay went seven innings striking out two and walking one, but he did give up two home runs, and five runs overall. Unfortunately, the game was briefly interupted when fans started throwing objects onto the field (including baseballs, a golfball and a AA battery). The Tigers were pulled from the field in the bottom of the eighth inning, causing a nine-minute delay. A statement was also read over the public address system reminding fans of the consequences of such actions. In another turn of events, the Rogers Centre was dry on April 7, as the province of Ontario imposed the first of a three-day alcohol suspension at the stadium, for "infractions (that) took place at certain past events" according to the press release [1]

The Jays finished the month of April with a 15-9 record (their best since 2001) and were tied for first place in the AL East. [2] Unfortunately, this did not translate into longer lines at the ticket windows; with 10 home games under their belts in April, attendance at the Rogers Centre was down. Only 20,396 fans came to see the home team play on average, down from 26,864 in April 2008. The decline was attributed to the global recession, and to the out-of-division opponents they faced (the team did not play division rivals Boston or New York until May). [3]

The winning continued in early May with two successful road trips. The game gathering the most attention, however, was the May 12th matchup, when the division rival Yankees came to the Rogers Centre. This game featured former Jays pitcher A.J. Burnett throwing for the Yankees in his first game in Toronto since leaving the city as a free agent the year before. On the mound for the Jays was ace Roy Halladay, who would lead his team to a 5-1 defeat of the Yankees. Halladay pitched his 41st career complete game, and allowed only five hits and no walks with five strikeouts. With this win, Doc moved to 7-1 for the season, and the Jays' record reached 23-12, the best in the League. Halladay was named the American League Player of the Week for the period ending May 17th, after going 2-0 with a 1.13 ERA over 16 innings in his two starts. The key to that early surge was a regenerated offense: lead-off hitter Marcos Scutaro played a solid shortstop while reaching base at an excellent pace, young DH Adam Lind was a constant run-producing threat in the middle of the line-up, while 2B Aaron Hill, back from a concussion that had ended his previous season in June, was getting both hits and home runs in bunches. Veteran outfielders Vernon Wells and Alex Rios started the season on a good foot, although they would soon slow down, while 3B Scott Rolen proved to be extremely productive after missing some early time with injuries. This hitting barrage allowed a young pitching staff to shine in spite of inexperience. The only disappointment was rookie LF Travis Snider, who stopped hitting after a hot first two weeks, and was sent down to the AAA Las Vegas 51's for further seasoning.

The fun ended in June, when the Jays had only 12 wins against 14 losses, with only one sweep, against interleague rivals Philadelphia on June 16-18. Halladay went on the disabled list for a two-week period during the month, joining reliever B.J. Ryan, who would never regain his form and was released a month later, and rookie Ricky Romero, who had started out the year very strong. The Jays had to patch up their starting rotation with minor league callups like Robert Ray, Brett Cecil and Mark Rzepczynski and journeymen veterans like Brian Tallet, Brian Burres and Bryan Bullington. For a brief period, Canadian Scott Richmond, with less than a full major league season under his belt, was the team's pitching ace by default. This state of affairs was a result of three young and promising pitchers - Dustin McGowan, Shaun Marcum and Casey Janssen, having missed the start of the year with serious injuries with Jesse Litsch joining them on the long-term disabled list after only a couple of starts.

The downward spiral continued in July, with only 8 wins for 17 losses. The team could only squeak out one win against the Yankees on July 6, having lost the 3 prior games. They were swept under the rug by Tampa Bay, losing 3 games in a row (July 7-9), and could only manage one win against Baltimore before losing the two final games of the series before the All-Star break. It was around that time that trade rumors started swirling around Roy Halladay's name, although the anticapted trade for prospects failed to materialize. He was selected to start the All-Star Game, joining Aaron Hill on the American League squad, but pitched poorly in the starts that followed, being plagued by the long ball, with an occasional gem thrown in for good measure.

After sweeping Oakland in a two-game series in early August, the Jays went on to lose nearly every game they played against division rivals New York and Boston that month (they would only beat New York once, on August 10). The month was one of departures: the ineffective closer B.J. Ryan was released, with the Jays having to eat a good chunk of his contract; Scott Rolen was traded to the Cincinnati Reds for Edwin Encarnacion and Josh Roenicke; and in a stunning move, Alex Rios was placed on waivers, to be picked up for nothing by the Chicago White Sox. The Jays were suddenly a lot younger, but not necessarily better; Travis Snider was recalled from AAA where he had been clobbering the ball, and minor league veteran Randy Ruiz was installed as the DH, with Adam Lind moving to the outfield. Ruiz would prove to be one of the team's better hitters over the final 6 weeks, clubbing 7 doubles and 10 homers while hitting .313 in 33 games. The only highlight in August would be a rousing win against Texas on August 31, when the Jays clobbered the Rangers 18-10. 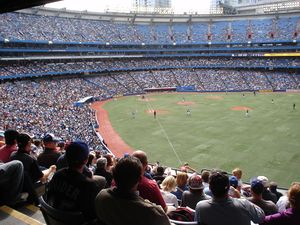 Jays and Mariners at the Rogers Centre on September 27, 2009.

September brought 14 losses against 16 wins, but the damage was already done. The Jays lost both games in a doubleheader in Texas on September 1, and the few bright spots that month were sweeps of Baltimore and Boston in the month's second half. By the time October came, the Jays had long been eliminated from the post-season. In another terrible road trip, Baltimore would beat the Jays in their final three games of the season, October 2-4.

The Blue Jays ended the season with a losing record, their first losing season since 2005. They finished with a 75-87 record (.463 overall), good for 4th place in the AL East, behind New York, Boston and Tampa Bay and ahead of only Baltimore, 28 games back from first-place New York.

The year also marked the first time the club saw its attendance at home drop since 2003. After a very disappointing season, the team dumped general manager J.P. Ricciardi with two games left on the schedule, to be replaced by young Canadian Alex Anthopoulos. There were also reports in the media that some team members had issues with manager Cito Gaston and his management style; some players apparently asked for his ouster as well. Also undecided as the season ended was the future of ace pitcher Roy Halladay with the club; he was widely expected to be traded for prospects before the start of the 2010 season. Combined with the expected announcement of a permanent president and CEO to replace Paul Beeston, who had now been interim president for a year, the team was expected to have a very different look in 2010. 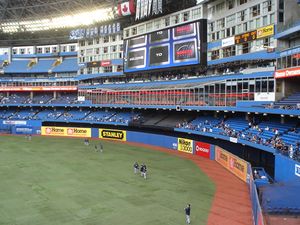 Scoreboard at Rogers Centre in September 2009

On a more positive note, second baseman Aaron Hill was awarded the AL Comeback Player of the Year Award, returning this season after a serious concussion suffered last year after a collision with David Eckstein. He finished the year with a .286 avg in 158 games, and was first among MLB second basemen in home runs, RBIs, total bases and at-bats. Ricky Romero was one of the top rookie pitchers in the American League, finishing the season with a record of 13-9, 4.30 in starts. Adam Lind also had a very good year, with a line of 35 homers, 114 RBI and a .305 batting average.

Some or all content from this article is licensed under the GNU Free Documentation License. It uses material from the Wikipedia article "http://en.wikipedia.org/wiki/Toronto_Blue_Jays#2009_season".