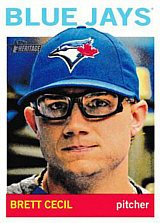 Brett Cecil was an American League All-Star in 2013, the first in a series of strong seasons deployed exclusively as a relief weapon. He remains the only man to toss a no-hitter in the history of the Cal Ripken Collegiate Baseball League, turning the trick with the Silver Spring-Takoma Thunderbolts in 2005.

Brett was selected by the Toronto Blue Jays as the 38th overall selection in the 2007 amateur draft. He was signed by scout Tom Burns and made his pro debut that summer. Quickly rising through the ranks in 2008, he started with the Dunedin Blue Jays (A), then was promoted to the New Hampshire Fisher Cats (AA). His experience making several starts in New Hampshire allowed him to move up to the Syracuse Chiefs (AAA). In total, he started 28 games with a 2.88 ERA. He was in contention for the fifth spot in Toronto's rotation in 2009, but as spring training started, the team brass felt he needed more time to develop his skills. Before returning to the minors, he was 1-0 in 4 appearances in Grapefruit League ball, with an ERA of 3.09. He started the season with the Jays' new AAA affiliate the Las Vegas 51s, but had a rough go of it, going 0-3 with an 8.31 ERA over 4 starts.

His luck soon changed as he was called up to the majors on May 3rd when the Jays sent down three pitchers and brought up three more, including fellow starter Robert Ray, who was also getting his first taste of The Show. Cecil started on May 5th in a game against the Baltimore Orioles, allowing 6 hits and 2 runs (1 earned) in 6 innings of a 10-6 win, permitting no walks but 3 hit batsmen. He went 7-4 with a high 5.30 ERA in 18 games in his rookie season, then took a big step forward in 2010. He established himself as the Jays' second starter behind Ricky Romero, putting together a record of 15-7, 4.22 in 28 starts, striking out 117 in 172 2/3 innings. Just as Cecil seemed poised to enter the elite of American League starting pitchers, he struggled mightily in 2011. He was 1-2 with a 6.86 ERA over his first 4 starts, giving up 24 hits and 11 walks in 21 innings. Rather than let him work out his problems in the bigs, the Jays sent him down to Las Vegas, where he continued to struggle before righting the ship, going 8-2 in 12 starts, with a 5.26 ERA, in a very hitter-friendly environment. He was called back to Toronto in late June, and bombed in his first start back, giving up 6 runs in 6 1/3 innings, before picking up the pace in July. He threw his first career complete game in a losing cause against the Boston Red Sox on July 5th, then won his next two starts and, on July 24th, pitched the best start of his career, earning his first shutout in beating the Texas Rangers in Arlington, 3-0. Cecil finished the year with a big league record of 4-11, 4.73 in 20 starts. Wishing to put the previous year's struggles behind him, Cecil showed up in spring training in 2012 33 pounds lighter than the previous year, scaling down from 252 to 219 pounds. Most of the weight loss was a result of switching to a healthier diet, as well as undergoing a more strenuous conditioning program. But he struggled badly, going 2-4, 5.72 in 21 games as a swingman.

In 2013, the Jays decided to make him a full-time reliever, and the move proved to be an excellent one. That season, he made 61 appearances out of the bullpen, going 5-1, 2.82 with 70 strikeouts and his first career save in 60 2/3 innings. In June, he broke a club record held by David Cone by retiring 43 consecutive batters. He was named to the All-Star team, a rare honor for a set-up man, and came on to face one man, striking out Domonic Brown of the Philadelphia Phillies on three pitches. He had another good season in the same role in 2014, with a record of 2-3, 5 saves and a 2.70 ERA in 66 games. He was used more often as a LOOGY, as his innings pitched fell to 53 1/3, but his strikeouts spiked to 76, giving him the highest strikeout rate of his career at 12.8 per 9 innings.

In 2015, the Blue Jays made the postseason for the first time since 1993 and Brett continued to be a key member of the bullpen, making 63 appearances with a record of 5-5 and 5 saves. As had been the case the previous year, he made a high number of very short appearances, limiting his innings to 54 1/3, but his high number of decisions indicated that he was not used solely for situational match-ups. He struck out 70 batters and his ERA of 2.48 was the lowest of his career. He made scoreless appearances in the first two games of the ALDS against the Texas Rangers, but tore his left calf, ending his season. His 2016 season was a tale of two halves: in the first half, he was awful, going 0-5, 5.14 in 21 games. He was hurt part of that time, only making 3 appearances in May and June. He turned things around completely in the second half, with a 1-2, 3.18 record and excellent K/BB ratio of 33/5. In the postseason, he pitched in all three rounds in which the Blue Jays played and did not give up a hit or a run in 4 innings spread over 6 outings, although he did walk three opponents. In his postseason career with the Jays, he never allowed an earned run.

article about Cecil's move to the Bigs and other articles on bluejays.com