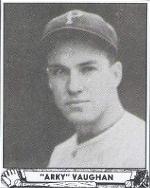 Inducted into Hall of Fame in 1985

Hall of Famer Arky Vaughan was one of the greatest shortstops ever. He played 14 years in the majors with a batting average of .318, which puts him at # 59 on the all-time list for career batting average. Honus Wagner, generally considered the greatest shortstop of all time, is nine points higher, and Derek Jeter, as of the end of the 2008 season - his 14th in the majors - is two points behind Vaughan at .316. Wagner had played for the Pittsburgh Pirates and was a coach for the Pirates during most of Vaughan's time with the team, giving Vaughan help on hitting.

He was the batting champion of the National League with a .385 average in 1935 (he was far ahead of the # 2 batter, Joe Medwick), but he never won an MVP award although he finished third twice. Vaughan missed three years after leaving the Brooklyn Dodgers because of a conflict with manager Leo Durocher, or else his lifetime stats would have been even better. When he came back in 1947 he was still able to hit .325 as a back-up.

He was the youngest player in the National League when he broke in in 1932 and hit .318. His teammates included future Hall of Famers Paul Waner, Lloyd Waner and Pie Traynor.

As a defensive player, Vaughan had good range and undoubtedly would have won some Gold Gloves if the award had existed then. He appeared in only one World Series, that one in 1947, toward the end of his career. He went 1 for 2 with a double.

Arky Vaughan died in a boating accident at age 40 in California's "Lost Lake." His fishing boat capsized and Arky was unable, because of the freezing water, to swim all the way to shore. His early death and his relatively short career explains to some extent the lack of support he received in Hall of Fame voting; it was not until the early 1980s that the Veterans Committee came around to selecting him, in spite of his flawless credentials. He had become all but forgotten by then, although his star began to shine again when sabermetric writers such as Bill James began to extol him as one of the greatest shortstops ever.

He is the uncle of Glenn Vaughan. His odd nickname is a result of his birth in Arkansas.