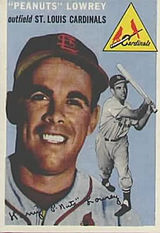 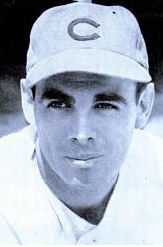 Peanuts Lowrey, who earned his nickname because of his small size, played professional baseball for 22 seasons. Primarily an outfielder, he also played third base and other infield positions at times.

Lowrey signed with the Chicago Cubs and began his pro career in 1937. He reached the majors with the Cubs in 1942 and established himself as a regular the following year, 1943 hitting .292 with 25 doubles and 12 triples. He enlisted in the U.S. Army in February 1944 and missed that season before being discharged in October of that year.

Lowrey returned to the diamond in 1945 and had perhaps his best season, hitting .283 with 7 homers and 89 RBIs as the Cubs reached the World Series. He hit .310 in the Series, but the Cubs fell to the Detroit Tigers in seven games. The next year, he made the All-Star team for the only time in his career and on July 12th drove in 7 runs in a game against the Brooklyn Dodgers.

During the 1949 season, Lowrey was traded to the Cincinnati Reds, and about a year later he moved on to the St. Louis Cardinals. With the Cards in 1951, he hit a career-best .303 and struck out only a dozen times. After being released by St. Louis after the 1954 season, he played his final big league campaign in 1955 with the Philadelphia Phillies. He then played four more summers in the minors, including two as a player-manager.

After his playing days ended, Lowrey managed in the minors before being a Phillies coach from 1960 to 1966, under manager Gene Mauch. He was a member of the San Francisco Giants staff in 1967 and 1968 and was one of the original coaches of the expansion Montreal Expos in 1969, again working with Mauch. He was then a member of the Cubs staff in 1970 and 1971 and was with the California Angels in 1972. He rejoined the Cubs in 1977, left in 1979, and returned briefly in 1981 until a heart attack led to his retirement. As a coach, Lowrey had a reputation as a master at stealing the opposing team's signs.

Away from baseball, Lowrey had small roles in several movies and as a child, appeared in several "Our Gang" films. He was also a very skilled golfer. He died in 1986 at age 67, a month after undergoing open-heart surgery.