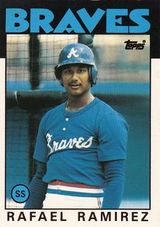 Rafael Ramirez was signed as an amateur free agent on September 28, 1976 by the Atlanta Braves and scout Pedro Gonzalez. He was assigned to the Gulf Coast League Braves his first year out in 1977. He did not fare too well, hitting only .177 in 175 at bats. He would spend the next three seasons in the minors, refining his game, before his first chance with the Braves in 1980. He appeared in 50 games, hitting .267 and fielded .949 from the shortstop position.

One of a large number of ML players from the town of San Pedro de Macoris in the Dominican Republic, Ramirez was the Braves' speedy, smooth-fielding shortstop from 1981 to 1986, leading National League shortstops in double plays four straight years while hitting quite well for his position. Ramirez led the league in 1983 with 160 singles and also ranked third in base hits with 185.

He made the National League All-Star team in 1984 with a .304 average at mid-season, but in 1987 torn knee ligaments limited him to only 56 games and he was traded to the Houston Astros after the season.

With the Astros in 1988, Ramirez posted his best batting average since 1983 (.276) and drove in a career-high 59 runs. After that, his production slipped, with his batting average never again rising above .261, and plummeting as low as .236 in 1991. He retired following the 1992 season having spent 17 years in professional baseball. He was 34 years of age.