Note: This page is for 1930s and 1940s outfielder Dixie Walker; for others with the same name, click here. 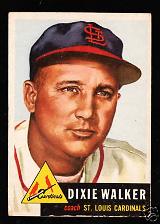 "It wasn’t easy for me to accept Jackie (Robinson) when he came up. But he and I were shaking hands at the end." - Dixie Walker

Outfielder Fred "Dixie" Walker had a lifetime average of .306. During an eighteen year career, he won a batting title and an RBI crown and was a four-time All-Star. He is remembered later in his career for his initial resistance to Jackie Robinson breaking the color barrier, although he later came to accept him as a teammate.

The son of Ewart "Dixie" Walker and nephew of Ernie Walker, Walker first reached the majors in 1931 in a cup of coffee with the New York Yankees, where he was a teammate of Babe Ruth. He returned to New York in 1933 and hit 15 home runs in his rookie campaign. However, he saw limited playing time in the next several seasons after suffering a shoulder injury. Dealt to the Chicago White Sox in 1936, he bounced back with a .302 average, 9 homers, and 95 RBIs in 1937, while leading the American League with 16 triples. Following the 1937 season, he was traded to the Detroit Tigers, for whom he hit .308 in 1938.

During the 1939 campaign, Walker was claimed off waivers by the Brooklyn Dodgers, the club with whom he went on to his greatest success and earned the nickname "The People's Cherce." He hit at least .300 in seven of his eight seasons with the team and made his first All-Star team in 1943. In 1944, he hit .357 to win the National League hitting crown, and although his average dropped to .300 the next year, he hit 42 doubles and paced the NL with 124 RBIs.

Walker's own standing in baseball history suffered because of events that occurred during spring training in 1947. When owner Branch Rickey announced Jackie Robinson would be joining the team, Walker encouraged teammates to sign a petition stating they would refuse to play with Robinson (although some articles say that Walker's role was overstated). Skipper Leo Durocher calmed the storm, and once Robinson proved himself, Walker warmed to him and even later conceded that he was a great ballplayer.

Following the 1947 season, Walker was traded to the Pittsburgh Pirates in the deal that brought Preacher Roe to Brooklyn. He hit .316 in his first year with the Pirates, and then recorded 13 pinch hits in 1949. He retired as a player after that season (although he did later make some appearances while managing in the minors).

Walker gets 126 points on the Gray Ink method of appraising ballplayers, compared to 144 for the average Hall of Famer. He is the only player to be a teammate of arguably the two most historically important baseball players, Babe Ruth and Jackie Robinson.

In addition to his father and uncle, Walker's brother "Harry the Hat" Walker played major league ball. He and Harry are the only set of siblings to both win batting titles. Until the Hairstons arrived, the Walkers were also the only set of major-leaguers to have two generations in a row of brothers.

After his playing career ended, Walker managed the Atlanta Crackers of the Southern Association from 1950 to 1952, also playing for the club in his first year. He went on to manage in the minors for a decade, with stints on the St. Louis Cardinals coaching staff in 1953 and again when his brother managed the club in 1955. In both cases, he started the season on the coaching staff, but was later sent to manage one of the team's top farm clubs in mid-season; in 1955, he actually replaced his brother Harry as manager of the Rochester Red Wings, following a brief interim by Lou Kahn. He later was a member of the Milwaukee Braves staff from 1963 to 1965 and of the Los Angeles Dodgers staff from 1970 to 1974. He was a scout for the Braves before and after his sting coaching with the team, from 1960 to 1962 and from 1966 to 1968. When the Dodgers decided that Wes Parker could be a better hitter in the late 1960s, they asked Walker to work with him, and he was successful.

In 1947, Walker was named as part of the inaugural class of the International League Hall of Fame.