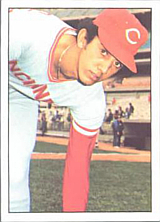 “There are some mighty good shortstops in the league today... But Concepcíon is a notch ahead of them all in all-around ability because his bat is stronger and his range in the field is greater.” - Alex Grammas, 1975

"...Davey was so earnest and so nakedly hungry in his pursuit of stardom that he left himself wide open for jabs. One day he walked proudly into the clubhouse wearing a flashy suit, one that he felt spoke to his status as a player. 'You look like Bozo the Clown,' Pete said, and everybody called Davey 'Bozo' for a while. One day, Philadelphia shortstop Larry Bowa walked over and said 'HI, Elmer!' 'Why do you call me Elmer?' Concepcíon asked. 'I figured it was your first name,' Bowa said, since every day I pick up the paper and the first thing I see in the box scores is E - Concepcíon'. Everybody called Davey 'Elmer' for a while after that." - Joe Posnanski, in his chronicle of the 1975 season, The Machine

Dave Concepcíon was considered by many to be the best shortstop of the 1970s. He spent his entire 19-year career with the Cincinnati Reds. A key part of the Big Red Machine, he won five Gold Gloves, was named to nine All-Star teams and was a member of the 1975 and 1976 World Series champion squads.

Originally drafted as a pitcher, Dave followed in the footsteps of Venezuelan heroes Luis Aparicio and Chico Carrasquel by moving to shortstop, debuting in 1970. After engaging in a time share with lesser lights Woody Woodward and Darrel Chaney, he came of age in 1973, batting .287/.327/.433 in 89 games before dislocating his knee days prior to his first 1973. He was able to bounce back in 1974 with a similar .281/.335/.397 line and a career high 14 home runs and 41 stolen bases. Dave would play more than 140 games every ensuing year through to 1985, with the exception of the strike-shortened 1981 season. The strike year, he merely finished fourth in MVP voting while ranking top five in the NL in doubles (28) and RBI (67). In 1982, he was All-Star Game Most Valuable Player, belting a two-run homer to pace a National League 4-1 victory in the first ASG played outside of the United States, in Montreal.

Concepcíon outlasted all of the other "Great Eight" from the classic Big Red Machine lineup, ultimately tying Barry Larkin for most seasons with the franchise (19). Larkin, in fact, was Dave's successor at shortstop, with the position manned by one or both every season from 1970 to 2004. Dave played 2,178 games at short; Barry a "mere" 2,085. Over the second half of his career, with the Reds lineup depleted due to an inability to churn out power-hitting stars nor willing to pay for free agents initially, Dave was often used as the #3 hitter. While he hit "only" 101 home runs, he had doubles power, smoking 389 lifetime. He also had speed to burn on the basepaths, stealing 321 bags. His hitting developed over the second half of his career, but he was always an outstanding fielder with excellent range. He honed a style of throwing to first base from deep in the hole in which he would bounce the ball on its way to the first baseman on artificial turf. In the postseason, he had a robust .351/.400/.486 line in 5 NLCS appearances (14 games) while batting .266/.296/.438 with 12 RBI in 20 World Series games.

Dave's last season was 1988, in which old teammate turned skipper, Pete Rose, used him on the bump in a blowout in Dodger Stadium. In 1 1/3 innings, he had an ERA of 0.00, allowing just two hits and a hit batsman while striking out his final batter, Franklin Stubbs. He was inducted into the Reds team Hall of Fame in 2000, along with Sparky Anderson, and had his number 13 retired in August 2007. His son, Dave Jr., later played in the Reds organization in 1995 and 1996.

In the Cooperstown Hall of Fame voting, Concepcíon regularly received 10-15% of the vote, with his highest total being 17%. He received 16.2% in 2008, which was his last year on the BBWAA ballot. In his first year of eligibility with the Veterans Committee, in a vote for players and executives from the expansion era (post-1973), he received more votes than any other player, but still finished third on the ballot, behind executives Pat Gillick (who was elected) and Marvin Miller (who was not). He received 8 votes, with 12 needed for election. Three of the ten most similar players to him, according to similarity scores as of 2020, are Hall of Fame shortstops: Bobby Wallace, Pee Wee Reese and Alan Trammell. He was part of the inaugural class of inductees in the Latino Baseball Hall of Fame in 2010.