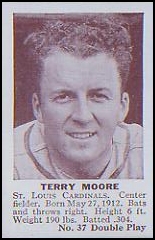 Terry Moore was a slick centerfielder who played his entire 11-year major league career with the St. Louis Cardinals and was named to four All-Star teams. He lost several years to World War II.

After his playing career ended, Moore was a St. Louis Cardinals coach from 1949 to 1952. He moved to the Philadelphia Phillies as a scout in 1953-1954 and managed the Phillies for the second half of the 1954 season. Moore then returned to the Cardinals coaching staff from 1956 to 1958.