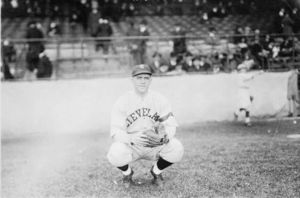 Catcher Steve O'Neill began his playing career with the Elmira Colonels in 1910 and spent most of the next year with the Worcester Busters before joining the Cleveland Naps late in the ­1911 season. He spent more than a decade with Cleveland, with his best season coming in 1920 when he hit .321 with 3 homers and 55 RBIs. He also played in the World Series that year, hitting .333 in seven games as the Indians defeated the Brooklyn Robins to win their first Championship.

Before the 1924 season, O'Neill was traded to the Boston Red Sox, and he was sent to the New York Yankees a year later, in 1925. After playing in the International League in 1926, he returned to the big leagues as a backup catcher for the St. Louis Browns in 1927 and 1928 Browns.

O'Neill began the 1935 season as a Cleveland Indians coach but replaced Walter Johnson as manager in mid-season. In two and a half years at the helm there, he is credited with helping in the development of teenage phenom Bob Feller into a solid pitcher.

After managing the Buffalo Bisons for three seasons, O'Neill was a member of the Detroit Tigers coaching staff in 1941. He managed the Beaumont Exporters in 1942 and then returned to the majors as Detroit's skipper for the next six years, from 1943 to 1948. Under his leadership, the Tigers won the 1945 World Series in seven games over the Chicago Cubs and finished second in the American League three times. In 1947 he was named as part of the inaugural class of the International League Hall of Fame.

O'Neill returned to the Indians as a coach in 1949 and, after beginning 1950 as a Boston Red Sox coach, replaced Joe McCarthy as Boston manager in mid-season. After spending a season and half at the helm there, he managed the Philadelphia Phillies for parts of three seasons, from 1952 to 1954. He later scouted for the Indians from 1955 to 1957.

O'Neill was the brother of Jack O'Neill, Jim O'Neill, and Mike O'Neill, and the father-in-law of Skeeter Webb (whom he managed with the Tigers) and minor leaguer Hank Nowak.