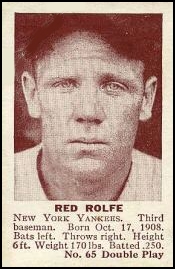 Third base was a dangerous job when Red Rolfe took over the position for the New York Yankees. Players at the position either moved up or out, with Joe Dugan playing there in 1928 but let go on waivers, Gene Robertson taking over in 1929 until sold to the Boston Braves in September, Ben Chapman playing there in 1930 but then moving to the outfield, and Joe Sewell (a shortstop for most of his career) finishing out his career at third from 1931 to 1933. Rolfe, who had been at Dartmouth College from 1928 to 1931, came up to the Yankees for one game at shortstop in 1931, then played two-thirds of his games at shortstop in 1934, but from 1935 on he was chiefly a third baseman and held down the position through 1942. Frankie Crosetti had the shortstop job during most of those years.

After his playing career ended, Rolfe coached baseball and basketball at Yale University from 1943 to 1946. He was a New York Yankees coach in 1946, farm director of the Detroit Tigers in 1948 and Tiger manager from 1949 to 1952. He also coached basketball in the NBL, a predecessor of the NBA. Rolfe then was the athletic director at Dartmouth College from 1954 to 1967.

Rolfe went to Dartmouth College. One of the divisions of the Ivy League baseball league is named the Rolfe Division in his honor. The other is the Gehrig Division, named after Lou Gehrig, who went to Columbia and was Red's teammate with the Yankees.