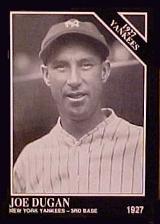 "It's always the same - Combs walks, Koenig singles, Ruth hits one out of the park, Gehrig doubles, Lazzeri triples. Then Dugan goes in the dirt on his can." - Joe Dugan

Joseph Anthony Dugan was born to poor Irish parents on May 12, 1897 in Mahanoy City, PA. At the age of fifteen months, Joseph's family moved to Winsted, CT, where the youngster grew up and played baseball. Batting and throwing right-handed, Dugan played for Gilbert High School for two years, before his family moved to New Haven, Connecticut.

While in high school, scouts for the Philadelphia Athletics saw Dugan and reported to Connie Mack that the youngster had potential. In 1915, the Dugan family promised Connie Mack that Joseph would sign with the Athletics. After graduating from New Haven High School in 1917, Dugan attended Holy Cross College at Worcester, Massachusetts. As an infielder, he attracted much attention in a game against the University of Pennsylvania at Franklin Field in Philadelphia. With several big league scouts at the game, Dugan played very well in the field and had four hits in four times at bat. Four professional teams soon offered Dugan a contract.

Major League debut with the Athletics[edit]

Keeping his promise to Connie Mack, Joe Dugan signed with the Philadelphia Athletics. At twenty years of age, Dugan went directly from Holy Cross College to the major leagues and played in his first major league game on July 5, 1917 at Fenway Park in Boston. Dugan did not have an auspicious debut.

When Whitey Witt sprained his ankle, Dugan was in the line-up for the Athletics, and faced the Boston Red Sox's Carl Mays and Ernie Shore in a doubleheader. "They'd knock you down and then throw that big curve ball. I went 0-for-8." Dugan remembered. "The next day it was Dutch Leonard and that curve ball coming in from Kenmore Square. I was 0-for-4. The last day it was Ruth, and I was 0-for-16."

Dugan asked Connie Mack if they were all like this? "Don't worry, son, they'll get easier as you go along," Mack answered.

"So we went to Chicago and I hit against that spitballer, Red Faber," Dugan later recalled. "He turned my cap around with a pitch, and I said, 'What was that for?' He answered. 'Respect, kid. Respect.' The next day I looked at Eddie Cicotte. They were too tough for me. I should have been sent out, but it was the War, and I stayed."

In his rookie season, Dugan played shortstop and second base and appeared in 43 games. In 134 plate appearances, he batted only .194. While he was struggling, Dugan received a great deal of verbal abuse from the Athletics’ fans, which saw him as untalented and raw. Dugan did not like the fans' boos or the city of Philadelphia, and he decided to jump the club and return home to New Haven and his family and friends. A few days later, Dugan rejoined the club and Connie Mack took him back. After this happened a few times, the Athletics' fans dubbed him "Run-Home Dugan" and "Disappearing Joe." Philadelphia Inquirer sportswriter Tony Maxwell nicknamed him "Jumping Joe Dugan."

The Athletics finished the 1917 season in last place. The 1918 season was no better for Dugan or the Athletics: playing in 121 games, he came to the plate 411 times and batted a very poor .195. The Philadelphia fans, meanwhile, continued to hurl terrible verbal abuse at him.

"I'd walk onto the field and waves of sound would pound down from the stands, The howls [...] beat my ears back,” Dugan recalled. Dugan pleaded with Mack to trade him, but the Athletics’ manager would reassure him, like a father to son, that things would get better. The heckling toward Dugan continued and, to make matters worse, the 1918 team finished in last place again.

By 1919, Dugan improved at the plate, finishing the year with a respectable .271 batting average. Playing shortstop, second, and occasionally third base, Dugan was becoming a very able infielder. It all came together in 1920, when he had the best year of his career. Playing in 123 games, Dugan came to the plate 491 times, and batted .322. Despite his wonderful season, the Athletics again finished last.

In those days, Mack was undecided if Dugan would eventually be his regular at third base or at second. He kept moving him from one position to the other and back again. But in 1921, Mack decided Dugan was more suited for third and moved him there permanently. Dugan found third easier than shortstop or second base, and he became an outstanding third baseman.

While the Philadelphia Athletics finished in last place for the fifth straight year, Dugan ended that season with a .295 batting average and led all third basemen in the league in fielding, with a .953 percentage. A brilliant fielding third baseman, Dugan was outstanding at anticipating a batter. He had extraordinary ability to come in on a slowly hit ball and throw out the runner. Whether leaping in the air to spear a line drive or picking up a hard hit ground ball one-handed, Dugan made all the plays at third base. Some considered him the best third baseman of that era.

Finally, in 1922 Dugan escaped the fans and the city he hated. In a big three-way deal involving Philadelphia, Boston, and the Washington Senators, the 25-year-old Dugan was traded to the Red Sox. The trade occurred after Washington sent Bing Miller, an outfielder, Jose Acosta, a young Cuban pitcher, and $50,000 to Philadelphia for Dugan. Washington then traded Dugan and Frank O'Rourke, an infielder, to Boston for Roger Peckinpaugh, an infielder and former Captain of the New York Yankees (Clark Griffith, President and part owner of the Washington Club, wanted Peckinpaugh as his manager).

Prior to the deal, the Chicago White Sox, Cleveland Indians, and the Yankees made offers for Dugan. Several times, Yankee co-owners Jacob Ruppert and Cap Huston talked trade with Connie Mack and would have paid $50,000 for Dugan, but Mack had declined.

After four years of the worst verbal abuse any ball player had to bear, Dugan was ecstatic to leave Philadelphia. Coming over to Boston, he played well over the first three months, batting around .285. However, on July 23, 1922 the baseball establishment and fans everywhere were shocked to learn that Joe Dugan had been traded by Boston Red Sox owner Harry Frazee to the New York Yankees, who were in a close pennant race with the St. Louis Browns. To obtain Dugan from the Red Sox, the Yankees gave up utility players Johnny Mitchell, Chick Fewster, Elmer Miller, an excellent defensive outfielder, and a player to be named later - which was pitcher Frank "Lefty" O'Doul. Red Sox owner Harry Frazee also received a considerable amount of cash.

Replacing an aged Frank "Home Run" Baker at third base, Dugan solidified the Yankee infield, joining "Deacon" Scott (shortstop), Aaron Ward (second base) and Wally Pipp (first base). With the Yankees and Browns embroiled in a very tight pennant race, St. Louis fans were outraged. As it turned out, the Yankees opened a four-game series with the Browns in St. Louis right after the trade. The Browns’ fans booed Dugan as soon as he got off the train.

Dugan suffered with a "trick knee" that began to give him trouble soon after joining the Yankees. The knee would lock and interfere with his play. In 1925, he had a very delicate operation and was in bed for six weeks. The surgery helped, but Dugan never played without the knee acting up on occasion.

Joe Dugan always made light of his hitting on the great Yankee powerhouses. He told one anecdote to highlight the power of those teams and what he felt was his more modest contribution: in one inning the first five or six Yankee batters all hit safely – doubles, triples, and a home run. According to Dugan, when he came to bat and hit a single, Miller Huggins fined him for breaking up a rally.

In his last season of playing over 100 games, he was the third baseman for the mighty 1927 Yankees team, considered by many to be the greatest of all time. He hit .269 with 2 home runs and 43 RBI that season and went 3 for 15 as the Yankees swept the Pittsburgh Pirates in the World Series. Dugan appeared in only 94 games with the Yankees in 1928 and was waived in 1929 to the Boston Braves, where he batted .304 in 60 games. Dugan retired after the 1929 season, but came out of retirement to play 8 games with the Detroit Tigers in 1931.

Many years later, one observer chose him as the third baseman on the All Joe Team.