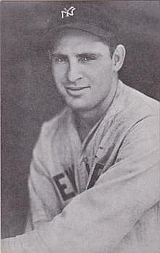 “As he prolonged the argument, I walked out from my plate position just as Case ordered Chapman from the field. ‘Chapman said, ‘If you say I’m out of the game, I’m going to let you have it.’ Case then said, ‘You’re out.’ Chapman swung and struck umpire Case in the face, whereupon Lazzeri ran out and grabbed Chapman. A policeman quickly appeared and escorted Ben from the field.” - James B. Clegg, illustrating Ben's temper, to The Sporting News, 1980

Speedy outfielder Ben Chapman was one of the best base stealers of the 1930s. He posted a .302/.383/.440 line and stole 287 bases during a fifteen year career, later working as a big league manager. His success is obscured by his virulent racism, heightened with Jackie Robinson's rise in 1947.

Chapman began his pro career in 1928 and joined the New York Yankees in 1930, hitting .316/.371/.474 in 138 games with 10 home runs as a rookie. Originally an infielder, he was moved to the outfield alongside Earle Combs and Babe Ruth in 1931. From 1931 to 1933, he led the American League in stolen bases each year while averaging 111 runs scored. In 1933, he was the first AL batter in the inaugural All-Star Game. Ben was involved in a series of disgusting displays that year, taunting Jewish fans at Yankee Stadium with Nazi salutes and disparaging epithets. Later, he deliberately spiked Buddy Myer of the Washington Senators in inciting a 20 minute brawl that led to a five game suspension and fine. At one time during his Yankee tenure, a petition signed by some 15,000 New Yorkers demanded Chapman be removed from the team.

Early in the 1936 season, Chapman was traded to the Washington Senators for Jake Powell, ironically, another player with his own set of racial issues, to make room in the Yankees outfield for a rookie named Joe DiMaggio. About a year later, he was dealt to the Boston Red Sox and led the American League with 35 stolen bases in 1937. After 1938, he was traded to make room for another rookie, this one named Ted Williams. Over the next four years, he played for the Cleveland Indians and Chicago White Sox as well as a second stint with the Senators. Chapman spent the next several years away from the majors, but not in the service as one might assume by looking at his big league stats. In 1942, he was a player-manager in the minors for the Richmond Colts of the Piedmont League. He was suspended from baseball the following year for assaulting an umpire. He was back with Richmond in 1944, now primarily as a pitcher, and made it back to the bigs late in the season with the Brooklyn Dodgers. In 11 games for Brooklyn, he went 5-3 with a 3.40 ERA. Midway through the next year, he was dealt to the Philadelphia Phillies for Johnny Peacock, and he became the Phillies player-manager. He made his last pitching appearance for Philadelphia on May 12, 1946 against the Dodgers at Ebbets Field; this qualified him as the last player-manager in Phillies history.

Chapman is infamous for being the loudest and nastiest heckler of Jackie Robinson during his rookie season in 1947. Early in the year, the Dodgers went to Philadelphia, where the Tennessee-born Chapman managed the Phillies, and he led his team in some rather vicious hazing of the league's first black player. It backfired, and he was chastised by both National League President Ford Frick and Commissioner Happy Chandler for his racist conduct. Eventually, league and team officials arranged a photo-op handshake between him and Robinson, Ben desperately needing some good P.R. to save his job. His managerial career in the bigs ended the following season when he was fired. He later served on the coaching staff of the Cincinnati Reds in 1952.

Chapman died of a heart attack at 84. He was portrayed by Alan Tudyk in the 2013 Jackie Robinson biopic 42.