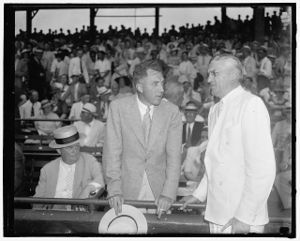 Ford Frick was a sportswriter and executive who served as president of the National League from 1934 to 1951 and as Baseball Commissioner from 1951 to 1965.

His most highly criticized decision as commissioner was to convince baseball record-keepers to list the single-season home run records of Babe Ruth and Roger Maris separately in 1961, based on the length of the season played. Later it was revealed that Frick had served as a ghostwriter for Ruth earlier in his career. Ultimately, the "asterisk" was struck from the record book; the point is now moot as several players have eclipsed the totals of Ruth and Maris.

Frick attended DePauw University in Indiana, where he was a member of Phi Kappa Psi Fraternity. He had begun his career as a midwestern sportswriter and had moved to New York, NY to work with William Randolph Hearst's newspapers. Later he pioneered the daily radio sports report, broadcasting sports scores and news. In 1934, he became the National League's public relations director, and then became president of the league later that year. In the late 1930s, Frick played a central role in establishing the National Baseball Hall of Fame and Museum in Cooperstown, New York. Later during his tenure as National League president, when several members of the St. Louis Cardinals planned to protest Jackie Robinson's breaking of baseball's color barrier, Frick threatened any players involved with suspension. In 1951, he succeeded Happy Chandler as commissioner of baseball. His critics accused him of favoring the NL in his rulings, such as how the 1960s expansion teams would be stocked.

Frick was himself elected to the Baseball Hall of Fame by the Committee on Baseball Veterans in 1970. The Hall of Fame created the Ford C. Frick Award in 1978 to honor his name, and presents the award annually to a baseball broadcaster for major contributions to the game.

Quote: "If you do this, you are through, and I don't care if it wrecks the league for 10 years. You cannot do this because this is America." Ford Frick, warning players not to strike over Jackie Robinson's historic 1947 major league debut

Some or all content from this article is licensed under the GNU Free Documentation License. It uses material from the Wikipedia article "Ford Frick".