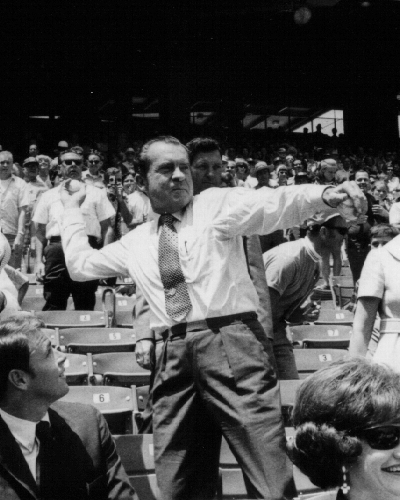 Richard Nixon was the 37th President of the United States, serving from 1969 to 1974. He is the only American President to resign from office. His resignation came in the face of imminent impeachment related to the Watergate scandal. He was also the 36th Vice President from 1953 to 1961 under Dwight D. Eisenhower.

During Nixon's 1960 election campaign, the recently retired Jackie Robinson openly campaigned for Richard Nixon, and wrote a thank-you letter to Nixon for naming him his best all-around athlete. However, by Nixon's second Presidental run in 1968, Jackie grew disappointed with what he viewed as Nixon's halfhearted stance on civil rights and campaigned against him.

In 1972 while still President, Nixon composed his selections for his All-Time All-Star Teams. Two decades later the 79-year old former President, released another selection of teams.

Various sources state that Nixon was once a candidate to run the Players' Association or even to take on the role of Commissioner after his Presidency.

There is a wonderful photo of Nixon and Ty Cobb smiling at each other. It was possibly taken on April 12, 1960, when Nixon threw out the first ball to christen Candlestick Park, and Cobb was also present (he lived at the time in nearby Atherton, CA).

Nixon's brother Ed, much younger than Richard, roomed with Dick Groat while at Duke University.