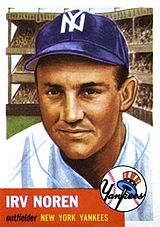 Irv Noren was an outfielder who played eleven years in the major leagues, tallying a very respectable career batting average of .275, along with a stellar 35 percent OBP. He appeared in three World Series and was on the All-Star team in 1954. He hit .300 in the 1952 World Series.

Prior to his major league career, Irv Noren played basketball in the NBL, a predecessor of the NBA. After his big league career, he was an Oakland Athletics coach from 1971 to 1974 and a member of the Chicago Cubs staff in 1975. He was originally signed by the Brooklyn Dodgers and scout Tom Downey before the 1946 season, but was sold to the Washington Senators after the 1949 season. He made his major league debut with the Senators in 1950.

He suffered from chronic knee problems.

He is said to have appeared with the San Francisco Seals in 1952 in an exhibition game, although he played 105 games in the majors leagues that year.

He managed the Hawaii Islanders in 1962 and 1963. It being the Hawaiian Islands, Noren had a $50 fine for any player who showed up too sunburned to play. He said one player came to Hawaii and got off the plane carrying a snorkel and flippers.

Noren was a scout for the Washington Senators in 1964, then was out of baseball from 1965 to 1969. He managed the Niagara Falls Pirates in 1970, then turned to coaching. He was also a horse owner who participated in races at the Del Mar Thoroughbred Club and elsewhere in southern California.