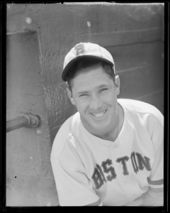 First baseman Buddy Hassett, the Bronx Thrush, played seven years in the majors and never struck out more than twenty times in a season. As a rookie with the Brooklyn Dodgers in 1936, he set a record by only striking out 17 times in 156 games, and he led the National League for most games played. He was also known for his defensive skills.

Away from the diamond, Hassett was a singer who regularly performed a vaudeville routine. He also served on an aircraft carrier for the U.S. Navy in World War II. He died of cancer at age 85.

Hassett is one of the few players to appear in at least seven seasons and get at least 300 at-bats in each season.

Hassett served in the Navy in World War II, and but for the war would have played more seasons in the majors. Although his last major league season was in 1942 at age 30, he wasn't released by the New York Yankees until 1946.

His last major league appearances were in the 1942 World Series, where he went 3-for-9. His last hit was in the 9th inning of Game 2 off Johnny Beazley of the St. Louis Cardinals.

After his playing days he managed in the minors from 1947 to 1950 for the Norfolk Tars, Binghamton Triplets, Newark Bears, and Colorado Springs Sky Sox.