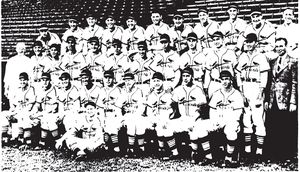 The 1942 St. Louis Cardinals had a tremendous season, winning 106 games in a 154-game schedule to capture the National League pennant, but it was no cakewalk. The Cards finished only two games in front of the second-place Brooklyn Dodgers and in fact did not reach first place for the first time until September 12th. What allowed them to get over the hump was an astonishing winning streak to finish the season. On the morning of August 9th, their record was a very good 63-40, but they were 9 games back of the Dodgers, having been as many as 10 games back a couple of days earlier. They swept a doubleheader from the Pittsburgh Pirates that day, and would only lose 8 more times the rest of the season, while piling up 43 wins, allowing them to catch and pass the Dodgers. They were in fact the second team since 1900 to win 42 games out of 50, the New York Yankees having accomplished the feat the previous season when they ran away with the American League pennant in mid-season on the back of Joe DiMaggio's historic 56-game hitting streak. The next team to win 42 games over a 50-game stretch would be the 2013 Los Angeles Dodgers.