Billy Southworth, who was named to the Hall of Fame by the Veterans Committee in 2007, was a major league player for 13 seasons and also a major league manager for 13 seasons. As a player, he was above average, while as a manager he had a notable .597 winning percentage, and won the pennant four times. Two of the wartime teams he managed won the World Series.

As a hitter, he led the league in triples in 1919, and slugged .552 in the 1926 World Series, which his 1926 St. Louis Cardinals won. The similarity scores method shows the most similar hitter as another player famous as a manager, Casey Stengel. Southworth and Stengel were traded for each other (along with other players) in November 1923.

The father of Billy Southworth Jr. and cousin of Bill Southworth, outfielder Billy Southworth was player/manager with the St. Louis Cardinals for part of the 1929 season. He managed in the minors for one season with the Rochester Red Wings before making his debut as a major league manager, and then went back to Rochester as a manager where his teams won three consecutive pennants. 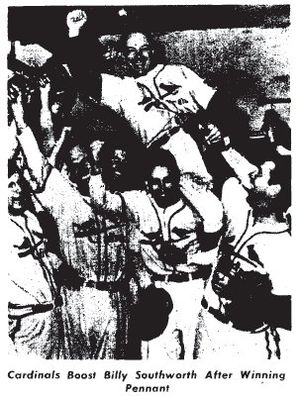 Southworth hoisted by the team after they win the pennant in 1942.