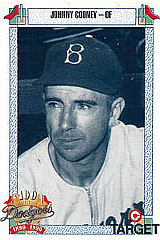 “I think Cooney is the best outfielder I ever saw in my life or ever heard of. He’s not fast, but he doesn’t have to be. He’s just always there when a ball has to be caught.” - Van Lingle Mungo

Johnny Cooney, whose major league career stretched from 1921 to 1944, essentially had two big league careers. He first arrived began as a pitcher with the Boston Braves, winning 14 games in 1925 with 20 complete games, two shutouts and 245 2/3 innings. He was no longer able to manage that load the following season, dabbling in some position play and mound work through to 1930. After four years back in the minors, rebuilding himself in the American Association, he returned to the majors with the Brooklyn Dodgers in 1935 as a full-time outfielder, not making a single pitching appearance henceforth. Johnny hit .318 and .319 in back-to-back seasons back in Boston (1940 and 1941), finishing his career in a split season with the Braves and New York Yankees during World War II. Johnny hit only two career home runs, which remarkably came on consecutive days with the Boston Bees: September 24-25, 1939. He also umpired one big league game, a June 28, 1941 contest between the Dodgers and the Braves, when the regular crew was unable to arrive on time.

He went on to be a long-time member of the Braves' coaching staff, from 1946 to 1955, managing them for part of the 1949 season, and remained with the club for three years after they became the Milwaukee Braves. He later spent 8 seasons as a Chicago White Sox coach from 1957 to 1964 while Al Lopez managed the team.