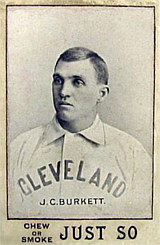 "Why you blank, blankety blank, do you know what I think of you? I think you are the blankest blank blank that ever came out of the blank blankest town in the blank blank land. You ought to be put in a museum." - Jesse Burkett, in a typically Crab-by 1906 tirade reprinted with the colorful language omitted

Jesse Burkett was one of the finest hitters of the 1890s and early 1900s, winning three batting titles and hitting .338 in a 16-year major league career.

Growing up in Wheeling, WV, a baseball hotbed at the time, Jesse began his professional career with Scranton of the Central League in 1888, winning 14 games. He had a tremendous season for Worcester of the Atlantic Association in 1889, going 30-6. He married a local woman that year, and settled down in Worcester for the remainder of his life. He was signed by the New York Giants on the recommendation of Jack Glasscock, a fellow native of Wheeling, a distant relative, and perhaps the top shortstop in the bigs at the time. Burkett began his big league career as a pitcher and split his rookie year between the outfield and the mound in 1890. He was 3-10 with a 5.57 ERA in 21 games as a pitcher and hit .309 in 109 games overall. His defense in the outfield was very poor, negating some of his value as a hitter.

After this unsuccessful first stint, Burkett went to the Western Association in 1891, playing the outfield full time for Lincoln. He hit .316 and was signed by the Cleveland Spiders on August 15th. He blossomed into a star at the plate, hitting over .300 for 10 straight seasons beginning in 1893. He twice hit over .400 (.409 in 1895 and .410 in 1896), winning batting titles both years. On his Hall of Fame plaque, Burkett is credited for hitting over .400 three times; subsequent research and updated records have lowered his 1899 batting average to .396. He was a teammate of stars such as Cy Young, Chief Zimmer and Cupid Childs with the Spiders, and the team played regularly in the postseason series of the day, winning the Temple Cup in 1895. In 1899, Burkett moved along to the St. Louis Cardinals (then known as the Perfectos) as part of the shenanigans that turned the Spiders - one of the top teams in baseball over the previous decade - into the worst team ever. He won another batting title with the Cardinals in 1901, hitting .376. After that season, he jumped to the St. Louis Browns of the new American League, but his average declined in each of his three years with the club. He ended his career with the Boston Americans in 1905.

In addition to his hitting, Burkett was also known for his speed, stealing 389 bases in his career. He also holds a record with 55 lifetime inside-the-park home runs. He was also a terrific bunter, who could lay down the ball wherever he wanted on the field. But he was a liability in the field, posting a large number of errors in the outfield, something that was relatively common at that time. His surly disposition also made him unpopular with teammates, earning him the nickname "The Crab", but he was not that way off the field, earning a reputation for working well with young players and with children in the offseason, leading to his continuous involvement in the game after his retirement as a player.

Jesse jumped back into baseball as the owner/manager of the Worcester Busters from 1906 to 1915. He was skipper of the Lowell Grays, Lawrence Barristers, and Hartford Senators in the Eastern League in 1916. He was the coach at Holy Cross in 1898 and then from 1917 to 1920, also managing the Haverhill Climbers of the New England League in 1919. Burkett became a Giants coach in 1921 under John McGraw, accompanying the team to the World Series that season. He returned to the minors as manager of the Worcester Panthers in 1923 and 1924 and was skipper of the Lewiston Twins in 1928 and 1929. He was head coach of Assumption College in 1928 and 1931-1932 and ended his managerial career by spending part of the 1933 campaign with the Lowell Lauriers. He also spent time as a Giants scout.

Elected to the Hall of Fame in 1946 (becoming the first West Virginian to be so honored), Jesse died of heart disease in Worcester at the age of 84.