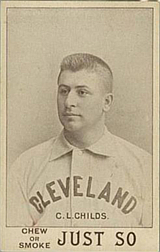 "'Cupid' Childs is about one half of the Montgomery team. The way the old leaguer covers the ground and swats the ball reminds one of 'Cupid's' palmy days when he was the 'whole thing' with the Clevelanders." - Atlanta Constitution, June 17, 1903

Cupid Childs was an excellent second baseman for 13 years in the big leagues. He ranks 24th on the all-time list for on-base percentage. Childs was a strong enough second baseman that in his entire major league career he played only one game at another position. He was short and husky, but covered ground well. As a hitter, he often hit well over .300, but since it was a lively ball era, that was to be expected. Still, his batting averages were good for the times, and the walks he added made him a leader in on-base percentage in every full season of his career. In terms of power, he was a good doubles and triples hitter early in his career. He was not a league leader in stolen bases, but nevertheless accumulated 269 in his career.

He was born on his father's farm near Sunderlandville in Calvert County, MD, one of 11 children. When his father died in the 1870s, the family relocated to Baltimore where Clarence learned to play baseball on the local sandlots. He was somewhat pudgy, being listed at up to 192 lb. on a 5'8" frame, which may explain his nickname "Cupid". He was also called less flattering names such as "Fats", "Fatty" and "the Dumpling" in contemporary newspapers. The Grand Rapids, MI Democrat called him "the most curiously built man in the baseball business [...] he is as wide as he is long, yet there are few men who can get over the ground faster than the 'dumpling'".

His semIpro and pro career ran from 1883 to 1904. He apparently started out at 16 with Durham of the North Carolina State League. Not much is known about that time of his life. His trail becomes more documented in 1885, when he was the shortstop on the semipro Baltimore Monumentals, and then for the Brooklyn Harlems the following season. By June 1886, he was with Petersburg of the Virginia State League, finishing the season with Scranton of the Pennsylvania State League. He was in the same league in 1887, starting the year with Johnstown, a team which folded on July 4. He was then picked up by the Allentown team, which in turn dropped out of the troubled league two weeks later. In 38 games between the two teams, he batted .373 and stole 14 bases. He then signed with Shamokin of the Central Pennsylvania League but his season was ended by a broken collarbone on September 19.

Childs made his big league debut in 1888 with the Philadelphia Quakers of the National League, playing two games before being traded to the Washington Nationals for Gid Gardner, a deal which was voided after Childs could not come to financial terms with Washington. Instead, he headed west to play in the Tri-State League for Kalamazoo, playing 58 games, hitting .282 with 11 doubles, 3 triples and 23 stolen bases. He finished the season with a 9 game stint with the Syracuse Stars of the International Association. He spent all of 1889 with Syracuse and had a great year, batting .341 in 105 games with 53 steals. In 1890, the team joined the American Association, a major league, and he kept on hitting, amassing 170 hits, including a league-leading 33 doubles and 72 walks, hit .345 and stole 56 bases. On June 1, against the Toledo Maumees, he had 18 total chances in a game at second base, tying a record.

In 1891, Cupid signed with his hometown team, the Baltimore Orioles. However, the American Association withdrew from the National Agreement that winter and Childs argued that this move made his contract void. He thus signed another contract, this time with the Cleveland Spiders of the National League. Baltimore objected, filing an injunction in the Baltimore City Circuit Court to force Childs to honor his contract with the Orioles. The trial started on April 5 and attracted national attention. On April 22, the judge handed a decision in favor of Childs because he considered that the provisions in his contract that bound him to Baltimore were based on the National Agreement, and since the AA disassociated itself from it, these provisions were no longer valid. The second baseman headed to Cleveland, where he would play for the next eight seasons with considerable success.

The Cleveland Spiders of the 1890s included a number of great players such as Jesse Burkett, Cy Young, Buck Ewing, John Clarkson and Bobby Wallace, all future Hall of Famers. They were led by a fiery manager in Patsy Tebeau. Childs hit .281 with 39 stolen bases in 1891, then .317 in 1892, leading the National League with 136 runs scored and a .443 on-base percentage. He continued to hit well over the following seasons: .326 in 1893, with 120 walks and 145 runs scored in 124 games, then .353 with 107 walks and 143 runs scored in 1894. On August 8 of that year, he broke his collarbone again when he was tripped by Pittsburgh Pirates first baseman Jake Beckley, but managed to come back to the lineup two weeks later. What was also remarkable in that period was how little he would strike out: a mere 12 times in 1893 and 11 in 1894.

After the 1898 season, the Spiders were the victims of syndicate ownership, as the Robison brothers owned both them and the St. Louis Perfectos. The owners decided to maximize their chances of winning by moving all their good players to St. Louis, with Cleveland getting the dregs. As a result, the 1899 edition of the Spiders was the worst team in baseball history, and the franchise was contracted after the season. For the decade the Spiders were in the National League, apart from the phony baloney '99 business, they were a top team. Childs holds the franchise record for most bases on balls (758) and is second behind Burkett in on-base percentage - .434 to .436 - and batting average - .356 to .318. He is third behind Burkett and Ed McKean in hits, triples and runs scored. When St. Louis got their pick of Cleveland's best players in 1899, Childs was one of the players moved to the preferred team, along with Tebeau, Young, Burkett, McKean and Wallace. Unfortunately, he contracted malaria that year, missed a lot of time and hit only .265. After the season, his contract was sold to the Chicago Orphans.

Childs was the starting second baseman for Chicago on Opening Day of 1900, but he was not over the malaria. The highlight of his early season was a violent fight with Pittsburgh player-manager Fred Clarke in Pittsburgh's train station, an escalation of an on-field incident earlier in the day. Overall, it was a year to forget, as his batting average fell to .241 and he lost his usual sure-handed ways around second. He returned to Chicago in 1901, but hit only .258 in 63 games. He was let go, putting an end to his major league career, but caught on with the Toledo Mud Hens of the Western Association where he played in 71 games, hitting .247. He bounced back somewhat in 1902, where he hit .290 in 33 games for the Jersey City Skeeters of the Eastern League, then .358 in 74 games with Syracuse of the New York State League. In 1903, he finally played with his hometown team, the Orioles having been re-constituted as a franchise in the Eastern League. He played 6 games for Baltimore under manager Wilbert Robinson before his contract was claimed by Montgomery of the Southern Association who had apparently legally reserved his services from Syracuse. Baltimore tried to buy back his contract for a considerable sum, but Montgomery refused; Childs sent a telegraph to Alabama saying he had no intention of playing there, but Eastern League President P.T. Powers ruled that Montgomery was in the right and that Childs would not be allowed to play for Baltimore any more. The second baseman reluctantly boarded a train for Montgomery, appeared in 108 games, hit .314 and was considered by local scribes as the team's best player by far. Still reserved by Montgomery in 1904, he went back north, playing in the New York State League with Schenectady and Scranton, hitting .245. It was his last season in organized baseball.

His baseball career over, he became a coal driver in Baltimore. He died young in 1912, having suffered from a lengthy illness, diagnosed as Bright's disease. A wife and an 8-year-old daughter survived him. He had bought a coal business a few months earlier, but had been prevented by his illness from running it properly, and it went bankrupt shortly before his death. He was buried at Loudon Park Cemetery in Baltimore.

While Childs was one the best second basemen in the 19th century, he never received much consideration for the Hall of Fame. At 13 seasons, his career was relatively short, and his best seasons were with two franchises that disappeared into the mists of history - the Cleveland Spiders and Syracuse Stars. If anything, today's newfound interest in on-base percentage makes him look better than ever, and a push by sabermetricians may eventually secure him a place in Cooperstown.