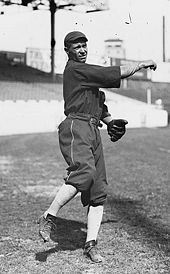 Morrie Rath played six seasons in the majors and ten in the minors. He was a regular for the Chicago White Sox in 1912 and 1913, but then spent years in the minors before returning as a regular with the Cincinnati Reds in 1919 and 1920. In 1912, he walked 95 times leading to 104 Runs, but only 19 RBI. He was the Reds' leadoff hitter during the World Championship season of 1919. He was hit by Eddie Cicotte of the Chicago White Sox leading off Game 1 of the 1919 World Series for the Reds; this was a pre-arranged signal to gamblers that the fix was on.

He owned a sporting goods store following his retirement from baseball. Rath shot and killed himself in 1945. He is the uncle of Mike Balenti.