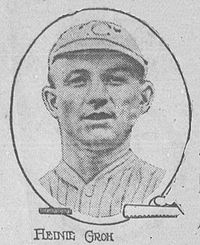 Infielder Heinie Groh played sixteen years in the majors and was on five World Series teams. He was well-known for his "bottle bat".

Groh began his pro career with the Oshkosh Indians in 1908 and spent three years with the club. He reached the majors with the New York Giants in 1912, hitting .271 in 27 games. Early the next year, he was traded to the Cincinnati Reds, and he soon became the team's regular second baseman, hitting .282 for the club. He moved to third base in 1915. In 1917, he hit .304 and led the National League with 182 hits and 39 doubles, and the next summer, 1918, he posted a .320 average to go along with an NL-high 86 runs scored and 28 doubles. He also briefly managed Cincinnati at the end of that season, going 7-3 at the helm. He hit .310 for a pennant-winning Reds team in 1919 and scored 6 runs in the World Series victory over the Chicago White Sox.

At the beginning of the 1921 season, Groh held out for a pay raise and refused to play. As a result, Commissioner Kenesaw Mountain Landis banned him. Landis would approve Groh's reinstatement only "on the express condition that Groh joins the Cincinnati team immediately and remains with it throughout the 1921 season." Groh was back in the Reds lineup two days later and ended the year with a .331 batting average. After the season, he was traded back to the Giants.

Groh hit just .265, his lowest average to date, in 1922, but he hit .474 in a World Series win over the crosstown Yankees. He returned to the Fall Classic in the next two seasons. After seeing limited playing time for New York in 1925 and 1926, he moved on to the Pittsburgh Pirates in 1927, where he saw scant action as the backup to Pie Traynor. He ended his playing days with one appearance in the 1927 World Series, as his team was swept by the Yankees.

Groh was famous for using the "bottle" bat - a bat with a very thin handle but a thick barrel. He led the league twice in on-base percentage, once in runs scored, once in hits, twice in doubles, once in walks and twice in hit-by-pitch. He was often a lead-off hitter and had a lifetime batting average of .292, split half between the dead-ball era and half in the lively ball era.

Groh was the brother of Lew Groh.