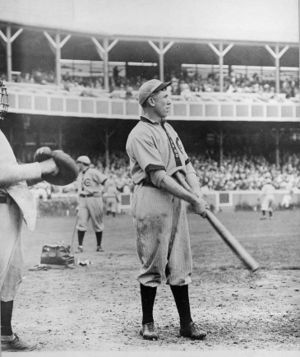 Catcher Pat Moran played 14 seasons in the majors before beginning managing the Philadelphia Phillies and Cincinnati Reds. As a player, he was a member of the vaunted Chicago Cubs teams from 1906 to 1909, appearing in the 1906 and 1907 World Series. As a manager, he was in the World Series in 1915 and 1919, winning the tainted 1919 World Series over the Chicago "Black Sox" as manager of the Cincinnati Reds.

Moran played solely catcher in the majors from 1905 on, but prior to that he sometimes played third base, first base, and other positions. As a hitter, he was second in the National League in home runs in 1903; he hit 7 long balls as a member of the Boston Beaneaters that year. He was 25 before he came to the majors, having played a number of seasons in the minors. Right before coming to the majors, he was with the Montreal Royals in 1899 and 1900. He umpired one National League game in 1901

There have been a dozen major leaguers named Moran through 2011, and Pat was at least once confused with Charles Moran, a contemporary, in a news article.

During spring training in 1924, he fell ill and died of Bright's disease at age 48.