Note: This page is for first baseman Fred Tenney who made his debut in 1894; for the player in 1884, click here. 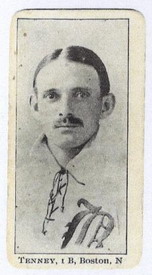 Fred Tenney was a first baseman with good fielding and above-average hitting who played for seventeen years in the major leagues, from 1894 to 1911.

Tenney went to Brown University, where he played catcher along with other future major leaguers Fred Woodcock, Frank Sexton, and Daff Gammons. He hit one ball that rolled along a concrete walk for a home run, and the opponent Princeton University objected, stopped the game, and severed baseball relations with Brown.

Tenney, who was born in Massachusetts about 30 miles from Boston, MA, played for the Beaneaters for most of his career. They were one of the top teams in the 1890s, winning the pennant in 1897 and 1898 under Frank Selee.

Tenney (as a first baseman) and Herman Long were credited with doing the first 3-6-3 double play in 1897. Tenney later remarked that there was a long silence after the play while the crowd absorbed the play, and then a huge roar because they had seen something new.

Tenney, by his absence in 1908, may have indirectly led to the occurrence of the Merkle Bonehead Play. Due to an injury, he was out of the lineup and was replaced by 19-year-old Fred Merkle.

Tenney served as player-manager for a number of his seasons, but the teams were not competitive.

Accounts would sometimes refer to him as a "soiled collegian" because it was considered a bit unseemly for a college-educated man to play baseball. However, that overlooked the fact that a number of his college teammates also played in the majors, albeit more briefly.

Similarity scores show two Hall of Famers on the most similar list - Lloyd Waner and Richie Ashburn. Ashburn is an interesting comparison because, although Richie was more prominent, both Ashburn and Tenney had good batting averages, good on-base percentage, speed but little power, and excellent defense.

There is another Fred Tenney who played briefly in the majors and also attended Brown University. The two were born twelve years apart.